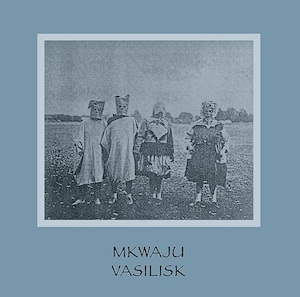 Originally released in 1988, this recording by the Japanese trio Vasilisk has been re-mastered and issued anew for a new generation of listeners keen on rhythmic and trance-like tribal electronic music with a goal of transcendence. The band’s stated intention is to create music for liberation and ecstasy. On “Mkwaju” (Swahili for “slash”) the intention seemingly adopts an African sheen and some musical influence and instruments from Africa itself as part of its search for spiritual freedom. The band appears quite respectful in its use of African symbols and influences and I think the members themselves might have sympathised in their own way with African peoples’ attempts to achieve spiritual communion through music, and identified with them.

A dark and very austere ambience reminiscent of some industrial bands of the period during which Vasilisk were issuing their original work (there were three albums in total) is present: Einsturzende Neubauten and especially SPK with their neo-primitivist excursions and identification with outsider groups like the mentally ill come to mind. Booming tribal trance rhythms come to the fore on tracks like “Photongnoul” and “Mkwaju I” but in a way that makes them sound very formal, remote and not at all inviting and convivial. When I listen to bands like Konono No 1 who emphasise very strong hypnotic rhythms in their music, I am always impressed by the joyful party atmosphere that is always present even as their lone members who do nothing on stage but oversee the action, in the manner of political elites spying on their people as they go about their daily lives, creep by quietly. For me, African trance music often takes place in situations of joy and inclusive celebration in spite of the hardships the musicians may experience in their daily lives. Here on “Mkwaju”, everything seems too ascetic and hermetic; while the performances are very good and the drumming especially reaches virtuoso levels of technical proficiency, the surrounding ambience isn’t all that conducive to inviting and relaxing listeners enough that they are ready to embark on their personal journeys towards an ecstatic state of spiritual communion and unity.

In this context there are some good tracks: “Fangs and Claws” might be an experiment in portraying oneness with our fellow animal travellers or in spirit possession. There is a very stylised air in its ritualism, and even the throat singing is so even in its tone, emotion and pace as to seem automatic rather than spontaneous. “And Dying Is All” is a powerful, surging track in its second half.

This is quite tasteful work but in its emphasis on solemnity and the ritual aspect of attempting and achieving transcendence, “Mkwaju” treads a very thin line between using repetition and rhythm as aids to hypnotism and alienating listeners with almost sterile and robotic music. The danger is listeners can feel as though they’re rushed on a safari through exotic rhythmic soundscapes – the short durations of the various tracks don’t help in this regard. Connection with the music is hard to make and without that, the dissolution of invisible mental and cultural barriers does not take place that would enable listeners to feel completely absorbed by the music and to be transported to unknown realms.