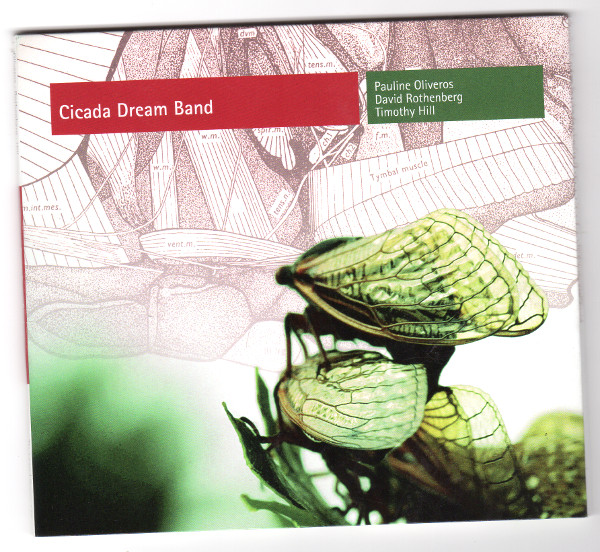 In which our three guides, Pauline Oliveros on the V-Accordion, David Rothenberg on the Bass Clarinet, Clarinet, iPad and Creatures and Timothy Hill using his vocal cords and resonating body cavities, draw us deep into a sophisticatedly blended oneiric suspension (of disbelief) involving, as the titles suggest, various recordings of insects, bird-calls and other ‘songs’ derived from non-human denizens of this planet as well as a distinctive instrumental palette threaded through with exploratory (human) vocalising.

Oliveros, at least, has been investigating teeming electronic/natural environment crossovers, conceptually at least, since her Bog pieces in the 60s. Here, as part of an unusually instrumented group that harnesses the potential efficacy and positive attributes (numerically unencumbered yet non-binary or solo-restricted – ‘Three of a Mind’, as a song title has it) of the trio format, she contributes reedy V-accordion washes to a complex yet limpid musical ecosystem that touches on Duke Ellington by way of Eric Dolphy, modern European Art Music, American 20th Century Composition, plainsong, throat singing, Native American chants, dinosaurs by way of avians, ancient insect campfire songs, Schubert’s trout, Vaughan Williams and the sounds of water-weeds swaying.

These Other Green Vistas are presented with all the blithe expansiveness of the Fool as he steps out on his journey in the Waite Tarot, but in this case with all impending precipices weathered away into a rich alluvial plain – or yet to be rent by glaciation – danger replaced by a welcoming, verdant land full of the promise implied in the traveller’s sky-gazing face.

Colourful vignettes cohere into a sort of utopian, synergistic and syncretic polemical nature documentary transmitted by telepathic poetic means (i.e. by music). The band itself: Troubadours of the mistily veiled fields of the unconscious (a New World, both America, the promise it represented to the European enlightenment mind, and the Cretaceous) stepping out to scent the air at dawn and twilight. Calls across gelid ponds, frogs’ calmly regard these penumbral scenes through amphibian eyes, mysterious thoughts like lily-pads realised in batrachian minds. An aura of calming, sinking, rising, steadying, buoyant, aqueous ambience permeates, which reminds me of the watery meditations in John Cowper Powys’s Wolf Solent. Simultaneously we are buried deep and secure in the cool mud like a dragonfly larva and skimming low like the fully grown creature over the flat surface of a body of inland water. An event that could of course be happening right now or millions of years in the past or future.

It is right to celebrate expansiveness through non-human manifestation, but at the same time there is no escaping aspects of physical and temporal reality where these same creatures live their non-human lives not as symbols in our artifices but as real beings, squeezed and poisoned by human activities, a result of both lack of consideration and of conscious exploitation. Indeed, the Humpback Whale, poster child for this fact since Roger Payne and Songs of the Humpback Whale and on to Yes’s ‘Don’t Kill The Whale’, makes an appearance on one track. This human-cetacean nexus could also remind us of John C Lilly’s dolphin communication experiments. Rachel Carson’s Silent Spring also, still, in this era of the descendents of WW1 nerve agents (centenary celebrations, IG Farben – also manufacturers of TG favourite Zyklon B in WW2 – and subsidiaries please take a bow) re-packaged for use in industrial farming (or war on biodiversity) offers an implicit counterpoint to the delicate and well-meant celebration on show here. This same environmental-celebratory aspect, if it resonates at all, also behoves you to cogitate about and agitate against agricultural chemical warfare and industrial exploitation of the animal kingdom. Or it should do. Perhaps those precipices are around after all?

Be that as it may, the shifting substance of the sounds, the meditative soloing against ever-uncoiling natural backdrops, the transition between human and animal, the thriving and vigorous visionary sonic eco-system, also recall a paradisiacal Dreamtime consciousness. A theme or attempt to evoke that is not unknown in other, related circles, if we in turn recall Annea Lockwood, her use of didgeridoos, or indeed the cross-cultural and trans-temporal rainforest wanderings of Jon Hassell. As the tracks unfold, sinuous river-bending vocal lines calmly propel us with the current through Siberia, Mongolia, Tibet, India, the Great Plains of America and on to Gondwanaland.

How we got here. The mystery and magic of origins, back in the dawn of history, remembered deep in lizard-minds. Also implied, though, is the question of where we are going. Something to ponder whilst following the alternately intricately frilled and fluted (pun intended – even though there’s no flute, I know) and open and expansive mental byways offered up in a spirit of generosity for us to striate our wing-cases and inflate our throat pouches to.