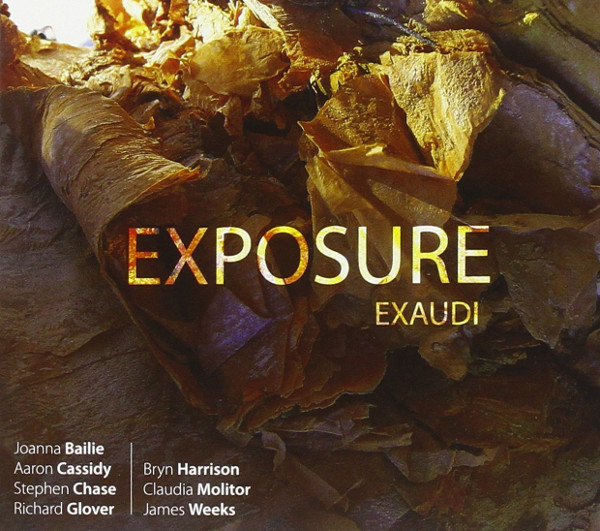 This is a collection of contemporary classical pieces, written for the voice and performed by the London-based Exaudi Vocal Ensemble. It was released by the Huddersfield Contemporary Music Festival label. HCMF is a very worthwhile yearly pilgrimage, this year, 2014, featuring the Arditti Quartet performing some very edgy pieces. 1

Exaudi performed these works there in 2013. Aaron Cassidy’s ‘A Painter of Figures in Rooms’ is a vocalisation of Bacon paintings, the bodies and souls, and therefore voices, all meshed together in fat, nerves and blood. Very Jeff Nuttall, if I’m allowed to say so in such company.

This piece, and many more here, owes something to Harrison Birtwhistle’s music theatre, Ligeti’s ‘Atmospheres’, the history and tradition of polyphony, and to Meredith Monk. Exhaudi often perform Baroque and Renaissance vocal music, alongside brand new experimental works.

Some of the pieces collected here work better than others. James Weeks’ ‘Nakedness’ is supposed to present the voice stripped of all its appendages, vibrato, flow, etc. But you need to be told what is supposed to be signified in ‘Nakedness’ before you actually get it.

This collection really works, for a surface listener, when some sort of onomatopoeia is active, however abstracted. When the music becomes what in semiotics is called ‘an iconic image’. Joanna Bailie’s Harmonizing Artificial Environment series sets the voice to field recordings, aeroplanes coming into land, and birdsong, recalling Messiaen.

Yet one of the most beautiful pieces here, ‘Lorem Ipsum’ by Claudia Molitor, is very Meredith Monk-like, and is simple, sheer joyfulness in action. The piece jumps off the sheer arbitrariness of connection between script and voice, straight into play. Similarly, Richard Glover’s ‘Corradiation’ moves voices up and down against each other, like slowly overlapping sine waves. Formal experiments like these need no contrived reference to Bacon.

Overall though, this is a rich collection, which works as an overall narrative, as well as an introduction to some of the lesser-known and slightly more major composers working in the vocal tradition today.