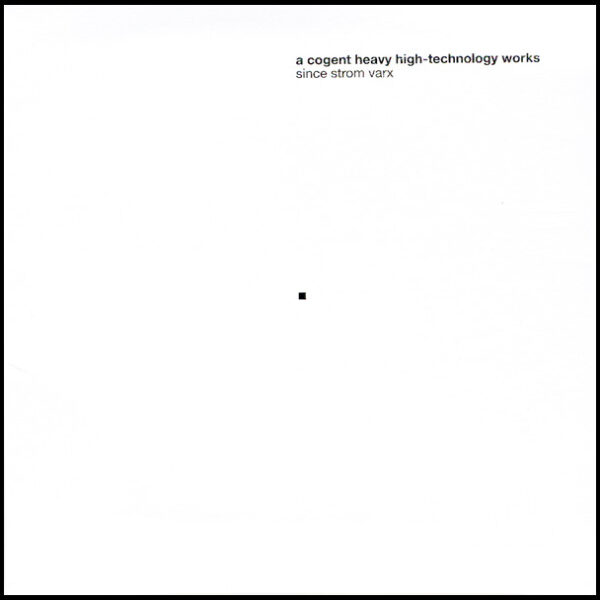 Described by his record label as a continuation of his ‘research into seismic noise dynamics and delicate stillness’, Strom Varx’s latest seeks to do so over the course of one track lasting more than 66 minutes. He distils his work into “a kind of electronic music that is perennial, futuristic, sensible, provocative and profoundly romantic; music that does not fit to any particular groupings” (his words). I must have missed the romantic on this release, unless what I thought was a battle between Luke Skywalker and the arcade game Space Invaders, was of course pre-dinner nuptials.

The first part is the aforementioned Luke vs Space Invaders, succeeded by elements of machine-like sounds, before concluding with a more chilled-out ambient feel. Alright then, a game of three halves (ladies tennis?). These three sections are pretty much equally divided across the sixty-six minutes. I must confess, the first first twenty-two minutes or so left me unmoved. Even when I endeavoured to concentrate fully on it, I found myself thinking about disparate things, none of which had anything to do with the music. Touching on the boundaries of noise, really I should be liking this, but then one man’s noise is another man’s nuisance.

The boundary between the first and second sections arrives with a little glitch cameo. The music calms down and starts to become interesting. Machine-like sounds meet ambient/drone. Having not heard them for ages, and it could be my memory, at times it reminded me of what I remember of mid-70’s Tangerine Dream. Certainly ‘kosmische musik’ comes very much to mind towards the end of this segment. Over its allotted time it moves and develops. The Luftwaffe (aircraft-like drones) battle it out with intermittent melodic drones at thirty minutes in, before moving into near silence. I do say near silence, because if you do not turn your sound up at this point, it will be silence. In fact, by turning it up two to three times your normal listening level should allow you to hear something.

The final installment was the one which I personally found the most rewarding. Out of the silence rises an ethereal experience. Long organ drones mix with outtakes from Gavin Bryars’ The Sinking Of The Titanic. This is not meant in a bad way, but more to hint at the soundworld to expect, the deep reverb echoing off the sea bed, the low distant sounds and the long chord lines, prior to being subsumed in a world of static and distant rumbles. Please Mr. Strom, next time can we have it in tracks, so we can lose the bits we can’t be doing with.