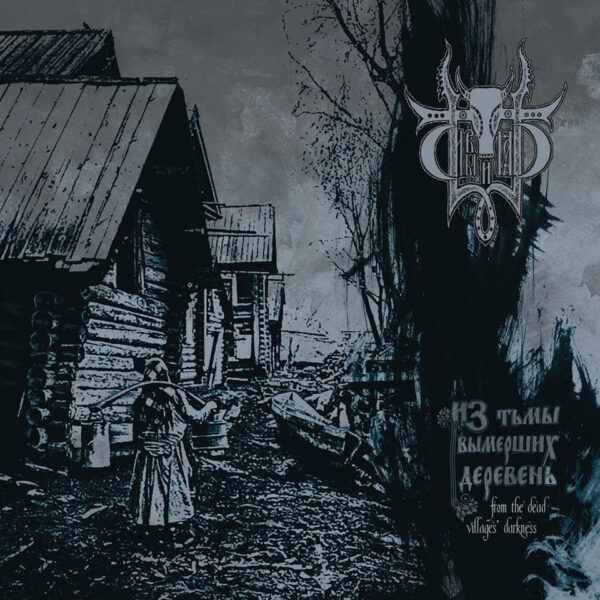 Russian one-man black metal projects are a dime a dozen these days; perhaps this phenomenon is a sign of the increasing prosperity of the country, that many people in different parts of Russia now are forming their own bands or projects, writing and playing their own music, and releasing it independently or through various labels. Sivyj Yar is one solo project (based in Vyritsa in the Leningrad administrative district near Saint Petersburg) that has actually been going for nearly decade with a respectable discography, with “From the Dead Villages’ Darkness” being its third full-length release.

Sivyj Yar’s main lyrical concerns deal with Russian / Slavic mythology, past cultural and pagan heritage and pride. On this album though, to judge from the songs’ titles translated into English, the theme is the suffering of rural villages and peasants, as an important strand in the make-up of the Russian character, its stoicism and patience in the face of hardship and disaster. The arrangement of the songs suggests a definite narrative from the initial disaster (perhaps a mass burning?) to its aftermath: all appears to be hopeless and the whole world seems to be shutting down. Listeners might presume that Nature will reclaim the abandoned fields and the fallen wooden houses of peasants either killed or long gone away.

The music takes in many influences from folk to post-metal and features various acoustic instruments such as violin, cello and flute but essentially it is melodic and often pop-friendly post-BM with an emphasis on catchy tremolo-guitar riffs, capable lead guitar soloing and often very good drumming. Bass guitar sometimes follows its own path through the music and in a number of tracks nature-based field recordings like falling water may be used. Songs coast along at a brisk pace and main man Vladimir finds room for blast-beat drumming sequences. Each track is crafted with thought and care, with the result that while there might be a lot of music in each song, it never sounds rushed or confused and each instrument can be heard clearly, though the quality of production might not be great (it sounds a little bleached). Background cold space-ambient synth wash on some tracks gives the music a chilling, despairing effect and there is a strong sense of hopelessness.

There can be a lot to absorb here and I would have preferred the album to be a bit slower to allow the melancholy, the loneliness and the dark atmosphere to make more impression than they do. The singing can be thin and ragged and it has to fight for attention above the guitars and the swirling violin melodies. The odd occasion where one instrument might be allowed to play, to express the despair and hopelessness in the lyrics, would have been very welcome. There are moments where a bluesy-sounding guitar appears and they carry intense emotion. Sivyj Yar could have brought in a balalaika or zither for an even more folk-flavoured rural BM style that would make the music stand out more among his post-BM contemporaries.

In my view, this is a very good album but it could have been much better with a less generic and commercial-sounding post-BM influence and more Slavic folk and ambient elements.