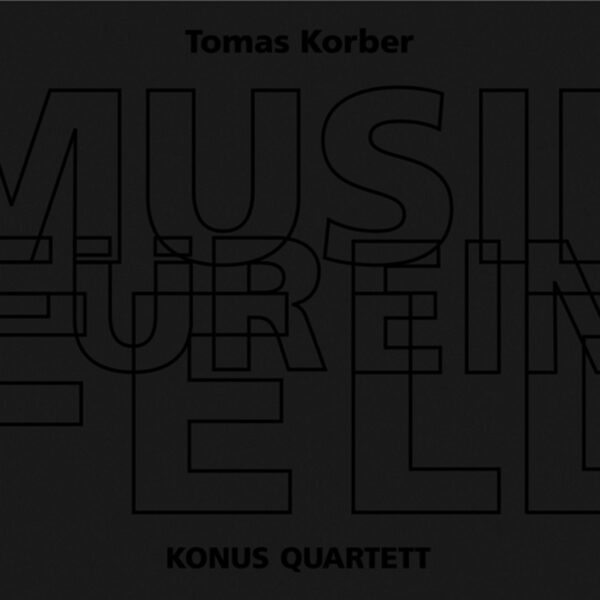 A major piece of composition from electronicist Tomas Korber. Exhaustive examination of the potential of the saxophone. The Konus Quartett use an armoury of tenor, soprano, baritone and alto saxophones and is made up of Christian Kobi, Fabio Oehrli, Stefan Rolli and Jonas Tschanz. Korber himself performs with Konus Quartett on processed saxophones, sine waves and feedback. Musik für ein Feld is a commissioned piece, so without the financial assistance of Stadt Zurich, S. Eustachius Stiftung and Burgergemeinde Bern, we might not have the opportunity to listen to an eleaborate and longform product of Korber’s imagination such as this.

Tomas Korber has previously been fairly prolific, augmenting his own discography with appearances on records by Jason Kahn, The Dropp Ensemble, eRikm, Mersault, and even finding time to mix, edit and master the And We Disappear CD by one of my favourite UK improv groupings, The Sealed Knot, among other things.

The field in the title is not expanded upon in the sleeve notes, and the only visual information on the black-on-black printed digipak is a device on the rear of six black rectangles getting fatter from left to right. This could simply represent a field of colour, or, considered as a graphic rendering of a shape, it suggests rotation, or a circular object – a zoetrope, perhaps? Apart from some soft breath soundings, Korber uses a lengthy quiet passage at the beginning, and additional long pauses scattered about throughout the piece’s 67 min duration, acting as markers or divisions. It is these, rather than the myriad other sonic events, which form the structural framework of the piece. The existence of these quiet sections might make you think Musik für ein Feld is of apiece with some kind of Wandelweiser release, but that is the only similarity. There are equally elements that are very maximal.

It is possible that objects are introduced into the saxophones themselves, seeds perhaps, in one section around 22 minutes in, and are allowed to interract with the instruments as they are subjected to various extended techniques. The production of all these sounds is crisp and clear throughout; Fabio Oehrli appears to be responsible for both engineering and mastering and I should say he’s done a very good job.

Musik für ein Feld momentarily put me in mind of Greg Stuart’s realization of A Wave And Waves by Michael Pisarro. Indeed, Korber has a release on Cathnor, the UK label that released A Wave And Waves; a duo recording with Graham Halliwell which I believe was only the third release on Cathnor, although I found that recording a little overlong and maybe even a tad pompous. Whether that’s down to Korber or Halliwell, I’m not sure. Whether Musik für ein Feld represents a distillation of Korber’s previous approaches, given this is his first release for three years is hard for me to say as, I’ll be honest, I am not wholly familiar with his prodigious output over the last 12 years or so. If you are already aware of Tomas Korber’s work, then I expect you will already have acquired this item. But if you are new to his work, I give it my wholehearted recommendation.