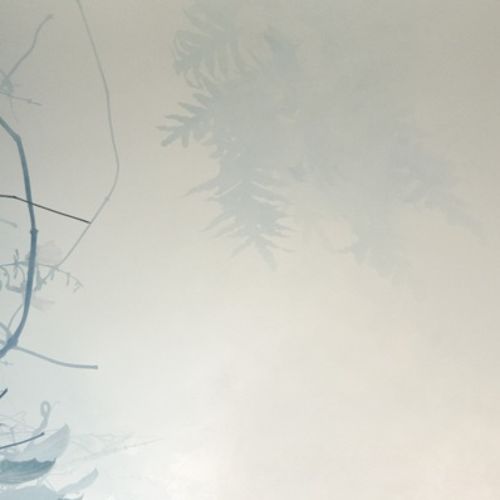 German sound artist Christoph Limbach has crossed our path a few times in the last 2-3 years, with his appearance on Four Corners of The Night, a cassette release on Staaltape; and through items on the Berlin Emitter Micro label, such as the trio with Hopek Quirin and Anton Mobin, and the puzzling tape 2 (3) Incomplete Triptychs made with Pierce Warnecke. Equally “difficult” is the tape begin_if_(3) (AGXIVATEIN #12) which we received from the Greek label Agxivatein on 16 June 2014. It’s certainly a minimal item, a tape which you’re not even sure is working for about the first five minutes, and when it does finally yield up some sounds from its inscrutable surface, it’s far from clear what we might be listening to, if indeed we’re hearing anything at all. For a long time my personal benchmark in this ultra-quiet genre – which I used to call “Very Special Nothing Music” – was the work of Bernhard Günter, who ran the Trente Oiseaux label to publish his own work and that of like-minded inaudible sound-art types. But Günter always seemed ever so slightly affected, employing strategies in his compositions that somehow called attention to how quiet they were, and used absolute silence in the programme as another deliberate technique to emphasise the nothingness. I’m not getting any sense of that with this Limbach tape, which for all its mysterious pauses and inexplicable qualities, feels a lot more natural and honest to me. Mind you, I am probably missing the whole point somewhere. Three times now I’ve tried reading the press notes which “explain” the methodology here, and I am still none the wiser, except I now apprehend that the work (1) involves a mixture of “concrete sounds and improvisation”; (2) uses editing techniques that are more familiar to sound editors working in the cinema, than to musicians; and (3) follows a structural map that is so conceptual and hidden that the listener will never understand it, or even discern it.

We could write further essays drilling down into each of these three points, but as to (1), that mixture of source materials is extremely common working practice now, and a large percentage of releases received at TSP follow it. That said, Limbach’s take on the technique is sympathetic and subtle. As to (2), this approach is very welcome, and one day I wish to write an essay extolling the innovative sound design work of Walter Murch, except that the task has largely already been done by other writers; find articles if you can about his sound design for the films of Francis Ford Coppola, and for American Graffiti. As to (3), this is not unwelcome either, and it reminds me very much of the structural cinema of Peter Gidal, whose films I have studied and whose polemical writings I have read. He was a very strong advocate (and practitioner) of using abstract, number-based or otherwise pre-ordained structures to build his films, and often stressed that it didn’t matter if the viewer managed to decode the structure; “the activation of the mind towards material analysis is the process that is relevant,” he wrote, “whether or not the actual structure is revealed.” 1 Gidal did this because by the end of 1960s he wanted to destroy mainstream narrative cinema, and the point of his efforts (with that of other structural-materialist film-makers) was to replace story-telling in film with something that would function as its exact polar opposite 2. Naturally I would never ascribe these same motives to the splendid Herr Limbach, whose sound-art here is, while challenging, also very beautiful, refined, and highly intriguing. Guest musician Angelina Kartsaki appears somewhere on the tape with her violin, and Julien Charlon did the near-imperceptible photography.