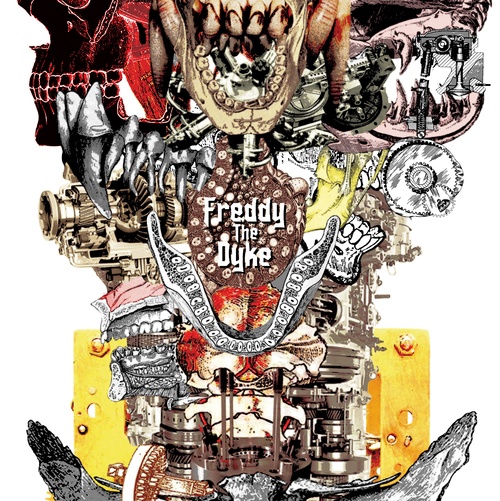 Freddy The Dyke is a great sleazy name for your band, suggestive of some NYC street scum from the 1970s who could either be a trans-gender cocaine dealer, or a confused gangster who drags up at night attracting catcalls from the fun-loving denizens of Times Square. In fact it’s the guitar-drum duo from Norway Bendik Andersson and Gaute Granli, who we have heard previously on one side of a Drid Machine cassette tape, but have since puked out an entire self-named album (SKUSSMAAL skulp02) of their high-energy, noisy skirl. A short and punchy album it is too, full of abrupt tunes and scottishes that are occasionally adorned with weird, yawping vocalising. ‘Den Korte’ and ‘Only Sixteen’ don’t disappoint if you’re looking for abrasive, punkified but fun-filled riffage and clobbering, the latter ditty punctuated with maniacal screams from the singing half of the act. I suppose I had hoped for an entire disc of this mode of unkempt bashing and guitar-mangling fun in the art-punk mode, but there’s in fact more “variety” on here than I bargained for. ‘Sandi Yama’ is pretty much ‘The Secret Life of Arabia’ played and sung backwards, and shows how the Dykesters can handle watertight song arrangements with as much verve and snap as they do when careening in free playing style down many dangerous slopes and sluices in their canoe. Then there’s ‘Serbian Standoff’, enhanced with its insane instrumental sections where the guitarist appears to have been let loose on a gigantic Moog synth from Hades when told to “take a solo”. The delirious illogicality of what follows can invert the craniums of eighteen giant moles. Nothing however quite prepares us for the centrepiece of the album, the 8-minute ‘Roto’ which requires the drummer to forego his usual Tommy Ramone-on-steroids approach in the service of a somewhat more avant-garde foray, an exploration of a dank metallic zone, rich in guitar atonality, spiky notes, and a paranoid murmuring undercurrent throughout to advance the sensations of doubt and ambiguity. Gaute Granli uses unspecified equipment in his set-up to produce what the label describes as “synth-infested” guitar, and Andersson also contributes electronics to the entire spew, so the boundaries of who’s playing what are far from clear. Mind you, similar technology has had the same effect on many contemporary music projects these days. I’d love to get a vinyl copy of this joyously yawping disc, if only to get my glazzies on the Yasutoshi Yoshida (Government Alpha) sleeve art, its typical collaged imagery aligning human anatomy with old machinery. From May 2014.