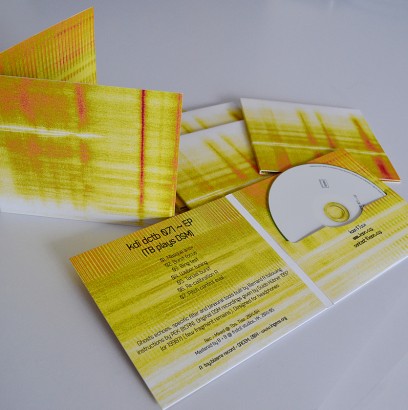 Toy Bizarre is the marginal French sound artist Cédric Peyronnet, also sometimes appearing as Ingeos, who since the 1980s has been entranced with the possibilities of field recordings of small events, and with the properties of magnetic tape. I have some catching up to with his catalogue, but note he has collaborated with Brume, Steve Roden, Roel Meelkop and Small Cruel Party. On this new release he’s doing a radical remake of the music of DSM (i.e. Guido Huebner), himself an overpowering enigma of strange performance events, deconstructed machines, and near-impenetrable sound art. The record is kdi dct 071-EP (TB plays DSM) (KAON JU14), and although presented as seven tracks in fact plays back as a single 20-minute burst of abrasive, denatured electronics and delirious, interweaved layers of extremely curious and unfamiliar sounds. The printed credits refer to “ghosts echoes, specific filter and binaural tools built by Bernard A following instructions by PEK (ItCAN)”, a paragraph whose references are far too recondite for me, but it seems the original DSM recordings may have come from 1997 or 1998. It’s academic in any case, as it seems that very little of Huebner’s material remains on the finished item. Whatever the means or methodology to produce it, this is a fascinating statement of dense, compelling, sonic information; in contrast to DSM’s rather vacant and perplexing voids, Toy Bizarre produces multi-textured and complex blocks, with multiple events and many points of interest for the curious lug. Clearly assembled with much intellectual rigour and clarity, it also manages to be far more surreal and mind-warping for me than three dozen Nurse With Wound records personally delivered to my door by Salvador Dali wearing a deep-sea diver’s outfit. Great! Arrived 30 June 2014.