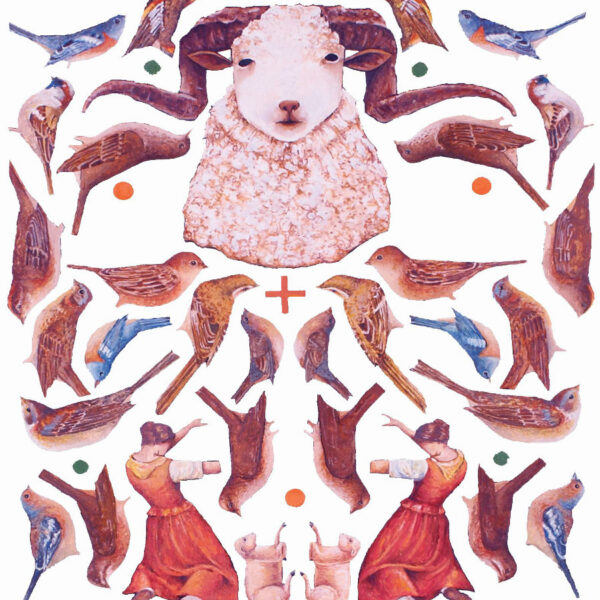 Charles Cros is most famous for developing a photographic colour process. You may also be aware that he almost invented the phonograph (or “Paleophone” as he intended to call it) when he submitted his method to the Academy of Sciences in Paris in 1877. However, an American by the name of Thomas Edison patented his own machine in January of the following year and that was the end of that. He was primarily a poet and writer though, and this is the standpoint from which this group of Canadian – and one English – improvisors wish to begin their tribute. Their starting point is in fact the input of the UK musician, Daniel Jones, who contributes remotely (and in advance) a minimal guitar and electronics improvisation which the Canadian group utilize in their actual performance. In terms of the other participants’ instrumentation, Joda Clément uses analogue synth, field recordings and objects, Lance Austin Olsen tape players, amplified objects and trainer guitar and Mathieu Ruhlmann a reel-to reel tape machine, cymbal, ukelin and objects.

So, will A Concert For Charles Cros set a trend for improvisation for absent contributors? Are Clément, Olsen and Ruhlmann truly improvising with Daniel Jones or does Jones’ pre-recorded input serve only the same purpose as a radio would in a composition by John Cage? The question we are being asked by this music is not perhaps about the specifics of its creation, rather whether we really need to consider them in the first place. Beautiful as the packaging is (and particularly true of a lot of product in this genre, I often wonder if every piece of electro-acoustic improvisation was presented in a plain brown paper wrapping, would we listen to the music any differently? As an entertaining experiment, Simon Reynell of the UK label Another Timbre went as far as publishing a body of works by different musicians anonymously on his website a little while ago, with the invitation to guess the musicians responsible.

As regards the musicians on …Charles Cros themselves, Joda Clément has previous releases on Alluvial Recordings, Mystery Sea, Unfathomless and Simple Geometry, Lance Austin Olsen was previously a painter of large canvasses and Mathieu Ruhlmann writes about new music for Soundscape in Vancouver in addition to releasing his music on labels including 3LEAVES, Unfathomless, Spek, Afe Records and Mystery Sea. Daniel Jones is an improviser based in Brighton, England. He has collaborated with musicians Seijiro Murayama, David Lacey, Patrick Farmer and Sarah Hughes in Loris and in trio with Jez riley French and Ivan Palacky as Tierce. You can find his work on cds released by Roeba, Cathnor (his recent-ish When On And Off Collide, I would heartily recommend) and with groupings on other labels such as Another Timbre and Engraved Glass.

Let us deal with the individual sections of this recording; ‘It Begins With A Sunbeam But Ends With A Flame’ crawls out of a dark, drear netherworld of empty space comes expansive metal tones big enough to span the Atlantic. The hum of underwater power lines on the seabed. It starts with Jones’ bowed cymbal or Tibetan bowl. There follows environmental field recordings, low vocal chants, static and fizz, and even someone brushing their teeth? Weather warnings off the radio. Static. Feedback. The silences when they do come are full of foreboding and unease.

Uncommonly for electro-acoustic improv releases perhaps, track two, ‘An Insect Tests The Circle Of Light’, sounds like the score to a sci-fi movie in places – particularly at the end. We are subjected to amplifier hum and light rubbing. A metal tank struck lightly some way distant. Metallic rumbling. Distant thrumming, possibly an engine of some kind. Crackle. More brief radio or television broadcast snippets amalgamating with high end feedback. Something rotates; possibly generating voltage clicks. Pulsing hum and what sounds like filtered static but what could be producing that noise I’ve absolutely no idea. ‘May, Is Out There, Three’ is trying to coax melodic content out of machine rooms and moving tones / high end sine tones, while the final track, ‘Not Vital’, is anything but.

Despite the very slick production, the “empty yet full” nature of this music is fascinating. The whole thing sounds like it’s taking its cues from a Wandelweiser score; there’s plenty of space, patches of silent sunshine cascading through the treetop canopy into wide clearings of soft burring electronic noise. To me, it has a distinctly “composed” feel, although this might not reflect the reality of the situation. Perhaps if there is no written score, the score could exist only in the listener’s mind?

Joe Panzner mastered A Concert For Charles Cros; he is one of the go-to mastering engineers for this kind of material and he makes a pretty good fist of things. A smidge more definition in some of the quieter sections would have been nice, maybe, but I’m just nit-picking here. The disc itself comes mounted inside a nice oversized full-colour sleeve with striking decorations by David Ruhlman plus a bookmark adorned similarly by sheep, ladies and birds. Caduc, the label responsible for this release, also has D.O.R, Kiiln (which both involve Lance Austin Olsen), and Coppice (Joseph Kramer and Noe Cuellar who have a release on the excellent UK label Consumer Waste, among others) on its roster. The name “Caduc” is French for “obsolete” or “on the verge of collapse”, and the label is run out of Vancouver, British Columbia by Mathieu Ruhlmann.