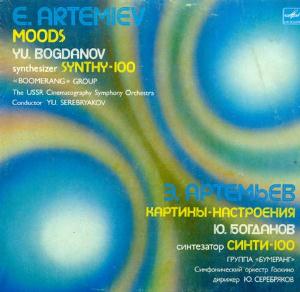 Best known for scoring the music to a number of Soviet and Russian films, among them Andrei Tarkovsky’s famous science fiction films “Solaris” and “The Stalker”, composer Edward Artemiev also recorded this album of fusion prog-rock, jazz, ambient, experimental rock, electro-disco and whatever else might have taken his fancy at the time, with the USSR Cinematography Symphony Orchestra, led by conductor Y Serebryakov. The album was recorded over a period of several years in the late 1970s / early 1980s and was released on the state record label Melodiya in 1984.

Much of the music sounds a bit stereotyped, as if made specifically as library music for advertisements, film soundtracks or corporate music motifs, and that actually may have been the intention with some of the more electronic or ambient-oriented pieces. Certainly track 3 “Polygon” sounds a bit like a soundtrack for a Saturday morning sci-fi space adventure cartoon for children with the analogue synth swirls and melodies going over jazz percussion. The tunes on most tracks don’t sound like anything out of the ordinary and I imagine Artemiev and the orchestra were hardly sweating while playing here. (Then again … ) Some pieces like “Rodnie berega”, “Krysha mira” and “Kolibel’naya” are very beautiful and shimmery in the way that synth-generated space ambient wash and glitter can be but they are hardly pushing the musical event horizons. The melodies are often very heavy-handed in their execution and spoil the delicacy and wonder of the soundscapes that host them.

After a while listening to this album, I lost count of the individual tracks and started listening to the album as one work of short, fragmented pieces. Had they all been joined up into one tapestry of outer-space sound art, the recording might have worked better as a concept album.You can guess already that the individual tracks – all of them purely instrumental and all performed on analogue synthesisers to some extent – have very little identity of their own. Carrying over into the second half of the album, I marvel that the music loses most of its earlier zip (not that there was very much to begin with) and stoically cranks away on the little energiser juice it manages to conserve all the way to the end.

Still, this recording may be a unique example of how composers like Artemyev tried to integrate experiments with electronic music with more popular mainstream genres to create a futuristic, experimental style of music acceptable to the Soviet government and public of the late 1970s / early 1980s. The album can be heard at this Youtube link.