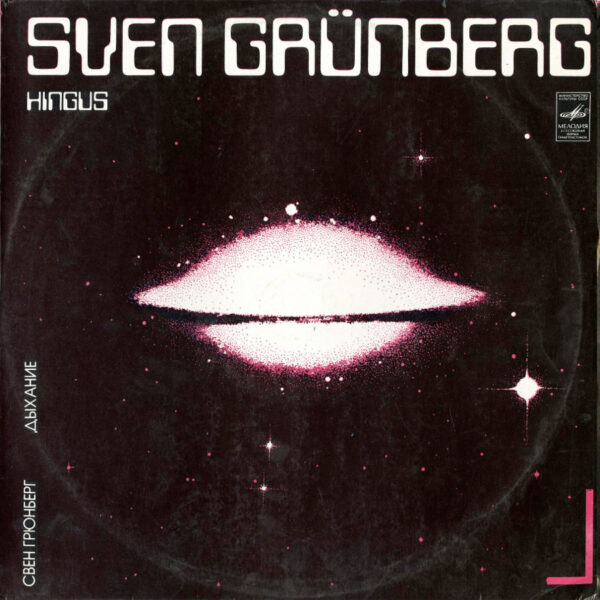 Despite the name, Sven Grunberg is not Swedish or Finnish: he was born in Estonia in 1956 and made his name as a musician with a progressive rock band (Mess) in that country, then part of the Soviet Union, in the 1970s. Due to official Soviet disapproval of their work, Mess never released a studio album and their recordings only became available to the public in the late 1990s. By this time, Grunberg had found his niche as a composer of film soundtracks and meditative music inspired by Tibetan Buddhism; he is also currently the Board Chairman of the Estonian Institute of Buddhism. He did find the time though in the period from 1978 to 1980 to work on and release this ambitious space ambient recording “Hingus” (Estonian for “Breath”) under his own name. “Ambitious” probably is an understatement: here is full-on overblown spaced-out dream cosmic psychedelia that attempts to explore and understand the extreme frontiers of the universe and astounds the listener with its daring and bombast.

The first side consists of a quartet of sprawling synthesiser wonder and organ grandeur pieces that evoke awe and wonder at the vistas opened up before one’s eyes. Soaring siren drones, beautiful liquid harp melodies and lovely quiet synth effects are to be found here but there is also plenty of cheap-sounding organ-banging synth-wash filler packing on the pounds and inflating the music far beyond its capacity to hold all the excess. There are just not enough distinctive melody or rhythm motifs to form a continuous thread that would hold the entire side together and provide the spine to which everything else can attach.

On the second side, “Teekond” is more mellow, melodic and reminiscent of Vangelis’ score for Ridley Scott’s “Blade Runner”, with a fair amount of theremin doodling. The last track ” Valgusõis” (“Flowering of Light” in Estonian) is initially dominated by a duet of reverb-laden synth and a bassy counterpoint melody wandering about and hitting apparent dead ends. A series of pretty sounds follows but there’s not much sense of direction for most of the track. It builds up slowly – rather too slowly – to a disappointingly cloying and cheesy melody that rounds off the whole recording.

While “Hingis” certainly has its sights set high, it runs very low on creative fuel and inspiration all too quickly and has to resort to a bag of tricks including massive volume, repetitive flourishes, lots of dazzle and bombast to impress its listeners. Curiously there are melodies that sound a bit like what I used to imagine Chinese Communist music to be about 40 years ago, coming at the tail-end of the Cultural Revolution; it’s quite possible that during the making of this album, Grunberg was already enamoured of Buddhism, particularly Tibetan Buddhism, and was drawn to East Asian cultures and music, and this might explain the slightly exotic Asian influences that are present. As a work striving for transcendence in a social / political context of repression, the album’s ambition is understandable. In this respect, in spite of its limitations, “Hingus” may still be a work relevant to present-day Estonia, hinting at a capacity as yet unrealised in Estonian people to transcend their current social, economic and political troubles – the country is losing people due to austerity programs that have resulted in high unemployment, poverty and high emigration rates (especially among young adults) and it is a question of when, not if, the population will fall below 1 million – and gain true freedom, free of ideological biases and blind spots.

The synthesisers played on “Hingis” were hand-made by Grunberg’s friend and fellow Mess musician Härmo Härm. The album can be heard at this Youtube link.