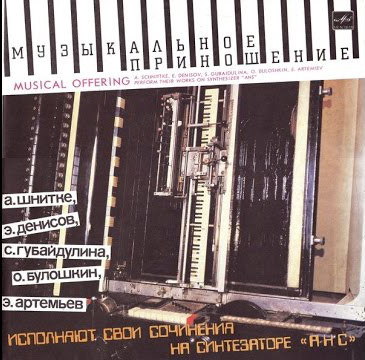 Modestly titled this collection of space-ambient electronic recordings may be but three of these pieces, all of which were composed and performed on the ANS photoelectronic synthesiser, are in fact uncommon forays into electronic-based experimentalism by composers and musicians more usually associated with formal 20th-century classical music. Alfred Schnittke (1934 – 1998) and Edison Denisov (1929 – 1996)  were pioneers in a style of 20th-century classical (orchestral, symphonic, chamber) music known as polystylism in which (as the name suggests) various styles of music past and present are juxtaposed. Sofia Gubaidulina (born 1931), a devout Russian Orthodox believer of Tatar descent who believes in music as a force for spiritual transcendence as a form of resistance against political oppression, has a body of work encompassing improvisation and the use of instruments, including Russian folk instruments and instruments from other cultures, in unusual combinations and ways of playing. All three ran afoul of Soviet bureaucracy at various points in their careers and all eventually left the Soviet Union / Russia in the early 1990s. Edward Artemiev is best known as the composer of various film scores for films such as Andrei Tarkovsky’s “Solaris” and “The Stalker”and various other highly regarded movies (“Siberiade”, “Burnt by the Sun”). I was not able to find very much information about Oleg Buloshkin apart from figuring out from Google that he has composed electronic and electroacoustic music works. Although Artemiev dominates the compilation by sheer length of music and Buloshkin is treated somewhat as an “infant” with his contribution shoved into first place, presumably to set the stage for the more illustrious pieces to follow, each of the six tracks has its merits and shows off the capabilities of the ANS synthesiser to good effect.

Of the shorter tracks, Buloshkin’s entry is an amorphous if brief space-ambient piece evoking the mystery and awe of infinite space with melody and a rhythm developing after the second minute. Denisov’s “Birds Singing” incorporates birdsong and other nature-based field recordings into a ghostly soundscape that conjures up images of an intergalactic zoo. Which are actual animal noises and which are generated on the ANS is hard to tell. This piece works well as library music for a film background soundtrack. Artemiev’s “Mosaic” is a sturdy if cold study of interstellar space ambient. Schnittke’s “Stream” is a reverberating metal drone texture piece that rings in your ears: by turns this is wintry, mysterious, even a bit mystical, and near its end majestic and awe-inspiring.

Of the long tracks, Gubaidulina’s “Vivente / Non Vivente (Alive and Dead)” has some difficulty with the “non vivente” part: this is a lively track that throbs and quivers with energy and zip even during its supposedly more comatose or mystical space-ambient sections. At least this is one false advertisement I don’t mind. Although this is more soundscape / sound art than actual music, the piece retains a sense of curiosity and wonder all the way through. Artemiev’s second track “Twelve Looks At The World Of Sound” is quite good too if bolder, brassier and a lot more boisterous and bombastic. Compared to Gubaidulina’s track though, I do get a sense of the sound being more forced, as if without the volume the music would turn out to be hollow inside.

As a group, these tracks demonstrate the range and capabilities of the ANS photoelectronic synthesiser in a way that they might not as separate releases. This compilation serves as an excellent introduction to the work of these composers; just visit this Youtube link and let yourself be surrounded by their sounds.