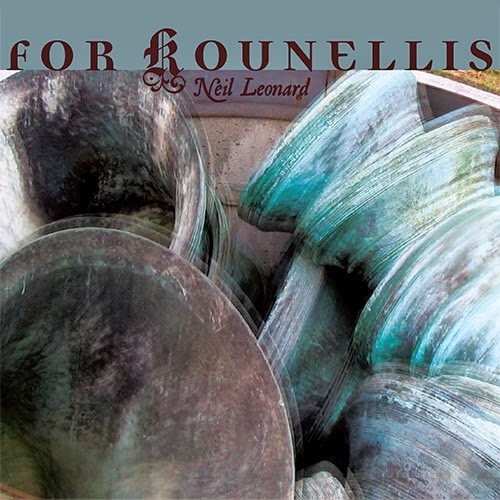 There is a meditative quality to this record, at times it engenders the same sound world of the Hilliards and Jan Garbarek. It might seem an easy comparison because of the saxophone, but it does. The inspiration for the work comes from an installation by Jannis Kounellis, the sounds of which Neil Leonard was commissioned to incorporate into a musical piece. Kounellis’ sculpture “comprises 23 large church bells that appear to spiral out from a cylindrical chamber rooted in the Earth’s core”. They face upward, mouth to the sky. The picture on the cover implies movement, although I suspect this to be creative licence. It is a shame that we are not given a photo showing the installation as a whole, if only to inform us of its scale. The one on the rear shows Leonard sitting playing his saxophone on the edge of one corner, bells firmly static. In an artistic flowery sort of way, the notes suggest the bells do not sound, which would make sense if only for the basic reason of ear protection alone. We are not told if the bells were cast at different pitches, one presumes they were, but then you ask, how many? There is also the possibility they were cast solely for their aesthetic effect, or equally there might have been an intention for them to sound in response to the elements on the hillside where they are embedded. Leonard talks about building up the courage to hit them, fearing that he might damage them. Was this his only method to produce sound? Unfortunately we are left to guess.

The premiere of the piece was undertaken on the slopes of Mount Vesuvius. Leonard saw a resonance between the now silent Vesuvius and the bells, both with portals facing upwards, both muted. Again, we lack information as to whether this was the only link between the sites. Reduced to Google translate I can inform you that the installation, if it can be called such, is found in an environmental park, and Kounellis’ work is one of many artworks which will be found dotted across the landscape.

This particular work is the culmination of Leonard’s recordings with the bells. A previous incarnation saw them used for a dance piece at which they were teamed with ‘heavy metal diva’ (you really couldn’t make this up) Alessia de Capua. That partnership continues here. Prior to this, the recordings were intertwined with calls to worship taken from around the globe, and Leonard acknowledges the debt to this earlier piece in establishing the sonic language of the work under review here. There certainly is something in de Capua’s vocals that evokes religious observance. Unfortunately they also conjure up the voice that used to adorn the theme music to the Danish TV series The Killing. There they only went on for about a minute, and possibly because of the timeframe, worked. Here they do have the capacity to irritate.

The vocals, as are the bells, have been processed at points, before being mixed with their natural states and the acoustic performance of the soprano saxophone. I admit that bells would not be at the top of my list of instrumentation if asked to compose a piece of music. Even Christina Kubisch couldn’t make them interesting on ‘Twelve Signals’, although, as here, there are moments when you feel like giving it a clapper. There is a tendency to go ‘look I’m hitting it hit’, ‘look I’m caressing it’, even maybe ‘I’m blowing my saxophone into it, are you listening?’. It is easy to criticise Leonard on this front because he doesn’t tell us exactly what he is doing. I bet it wasn’t as interesting as another work of Kubisch’s, which I haven’t heard, where the bells volume and moments of sounding are relative to the amount of light falling on the bell. So at nighttime they fall silent. Now there is a woman who thinks on her feet up a clock tower, although mind you it still has the likelihood of being a ringing dodo, plus you wouldn’t want to live next door to it.

Because the work traverses various sound worlds throughout its forty minutes, it has the difficult task of generating a piece that holds together as a whole, whilst at the same time showcasing the different elements. Trying to be all things to all men means that sometimes the piece works well, at other times less so, where it does tends to be where the saxophone is involved. I ended up believing that Leonard should have concentrated more on less, and at times had more courage in avoiding some standard cliches. The computer-aided elements are at points well executed, although even here the processed voices probably overstay their welcome. At times you are reminded of Leonard’s day job, some of the dreary electronic/electroacoustic nonsense built on theory, but lacking musical feeling, that comes from academia, although to be fair we never plumb those depths. For myself I’d be happy to have a piece that revolved around the first five or so minutes, extended the last three minutes (now that was good), thrown in the sax from the middle, lost the academic bell ringing and told the singer Mt. Vesuvius was in South America. You my friends, especially if you are a Late Junction listener, will love the chanteuse and the sax, some of the bells, and run as fast as you can from the academic electronica.