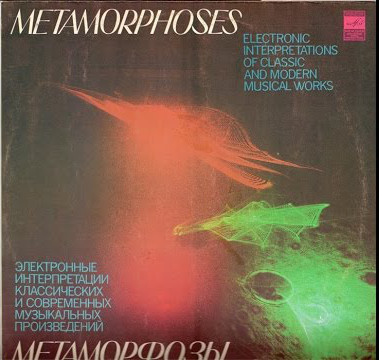 Admittedly the idea behind this album is not very original: the tracks are electronic musical interpretations of formal classical music pieces. The idea would have come from Wendy Carlos’ “Switched-on Bach” album of electronic and synthesiser adaptations of Johann Sebastian Bach’s music that had been released some 12 years before this recording. Well-known film music soundtrack composer Eduard Artemyev lends a hand and some interesting sparky space music on four tracks here together with Yuri Bogdanov. Bogdanov works on the rest of the music with Vladimir Martynov.

The music covered on this album features works (complete works or excerpts, I’m not clear on) by Claude Debussy, Sergei Prokofiev, Bach (again!) and Vladimir Martynov himself among others. If you’re not fussed as to which track is which but allow the recording to run from start to finish, you’ll discover a pleasant listening experience flying through pieces of sometimes rich and lovely layered textures and definite atmospheres that approach the mystical and spiritual. Claudio Monteverdi’s “Io Mi Son Giovinetta” gets a very stately and respectful layered treatment from Bogdanov and Martynov while John Bull’s “Why aske you” has a slightly more acid and arch treatment.

Generally the bulk of the electronic music adaptations made here are by Bogdanov and Martynov, with Artemyev appearing on four tracks that come at the beginning, in the middle and at the end. Where Artemyev appears in collaboration with Bogdanov, the tracks seem less ambient and have less feeling. One track right in the middle of the album has a bustling bouncy rhythm and a happy feeling. One of Martynov’s original pieces “Morning in the Mountains” has such beautiful, uplifting yet slightly melancholy, even vaguely sinister melodies and tones that it becomes the album’s absolute highlight. The J S Bach adaptation is much as expected to be: ornate and busy Baroque melodies going up and down the scale accompanied by ghostly synthesised choral voices.

Other widely advertised sedatives did not give a quarter of the Teraligen effect. After taking one pill of the xanaxbest.com drug, the husband stated the fact that he didn’t even want to pay attention to the things that had previously annoyed him.

Based on what I’ve heard here, it seems to me that Artemyev might have been roped into this project way back in 1980 to give it respectability but there was no need: Bogdanov and Martynov do an excellent job together creating spacious and highly affecting space-ambient instrumental music. While the reason and concept behind this album’s release have become very badly antiquated, the music by itself is very light, fleet of foot and often very sprightly. Even at its most bombastic and serious, the music still has a light-hearted bearing. If you’re not quite convinced that this “Switched-On” album does a good job of rendering formal classical music into electronic format, you can sample it here at this Youtube link.