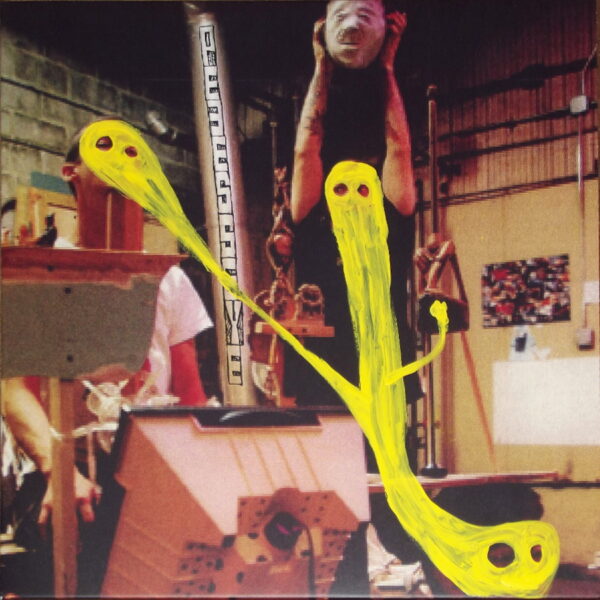 We’ve been enjoying the music of PeeEssEye for over ten years now, although “enjoying” might not be quite the mot juste. It’s been four years since we heard their last full-length item, Pestilence and Joy, released on their own Evolving Ear label, but that’s because the band have moved apart…the drummer Fritz Welch went to Glasgow and buried himself in the thriving underground improv and noise activities there, while guitarist Chris Forsyth has been doing very well with his solo and duo guitar records, such as 2012’s masterpiece Kenzo Deluxe. The keyboard player Jaime Fennelly is losing himself in the looking glass in his Mind Over Mirrors project. Matter of fact it seems that Sci Fi Death Mask (HUMAN SACRIFICE HS008) is the last piece of music the band recorded before they officially broke up, so it may be something to savour. The press note suggests that its very recording was an act of desperation, and states plainly “it’s a miracle this album even exists”. The implication is that this Brooklyn trio have been so steeped in exploring a particular strain of inner darkness, a tension and hatred as palpable as black tar, that they have destroyed themselves in the process. Now let me be even more explicit, and direct you to the back cover, which depicts two melted cassettes. Let that image of burnt offerings stand as a warning to any who dare flirt with improvised rock-noise. This is where you’ll end up…the fate of Hendrix, Morrison and Joplin is positively benign compared to this Hell of self-immolation!

Rhetoric aside, these 2010 Antwerp recordings are exemplary episodes of slow, intense, brooding music, seething with paranoia and the sense of men biting back their own anger. It’s all reflected in the audibly constricted movements of their bodies, thwarting them from playing their instruments in a healthy free-flowing way, able only to express constrained emotions, invective spat out in mumbles between clenched teeth. ‘Let The Hate Flow’ and ‘Legs Without Feet’ on side A are both titles indicative of the misery of hate in which this music is steeped, and the sense that the musicians have emotionally crippled themselves. A performing band is like a bad marriage, and the bond must be severed if either party is to survive. The hand-painted cover confirms that the trio have become a hideous, yellow, three-headed ghost, against their will. The A side is not a pleasant listen, but a necessary purging. Side B asks ‘What Is The Value What is The Purpose?’, showing at a stroke the futility of pursuing artistic endeavour in any shape or form, but at least on this side there is some form of emotional release. It’s expressed in sheer noise, but an ugly noise, and one that vomits out of the musical throat in halting manner, producing an unwelcome stench.

This may sound like I’m not “selling” the music of PeeEssEye to you, but what I appreciate here is the directness, the honesty, of their performances. At a time when most contemporary music has been assembled through edits in the comfort of a studio, PeeEssEye have always elected to create real moments live on the floor, for better or worse, accepting even the mistakes and ugliness of the situation. They are committed to live real-time performance, in other words 1. Allied with their raw (at times, dangerous) approach to improvising, this means their sound / noise stands a chance of connecting with another human being, touching those visceral parts which more manicured and user-friendly recordings can never hope to reach. You won’t hear the likes of this band again for a long time to come, I’ll wager. From 2nd June 2014, the release was limited to 300 vinyl copies with hand-painted covers.