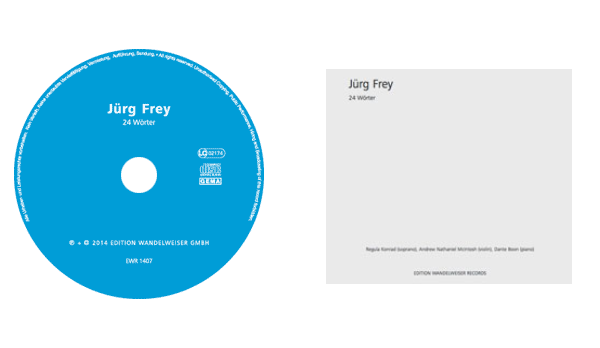 Actually there are 27 short pieces on this album, with two tracks being purely untitled instrumental pieces and the other 25 tracks being sung and sharing 24 titles with two tracks named “Tod (Death)” and another two, “Gluck (Happiness)”. There are just three performers on this recording: soprano vocalist Regula Konrad, violinist Andrrew Nathaniel McIntosh and pianist Dante Boon, all singing or playing very sparingly with no apparent feeling or technical flourishes. All tracks are very quiet and spare almost to the point of fading away into nothingness yet throughout the album there is a very strong impression of latent creativity and power. The piano usually plays seemingly disconnected piano notes or chords that go on forever while the violin hovers around thin, almost squeezed-out high-pitched, barely-there tones. The silence surrounding such clean if rather thin music is very still and static but you sense there are many hidden possibilities. Konrad’s singing is steady, confident and precise.

There is not a great deal to say about the music generally as the tracks don’t vary much overall and differences among them are in the technical details of the spare music. As for the track titles though, there’s plenty to say about them: they often describe states of being such as being lost or being a dancer or dreamer, or states of emotion such as longing, feeling out of place, cheerfulness or being close to someone or something dear. The one-word titles can be quite vague and what appears to be a state of being can be just as much a state of mind and feeling, and several tracks appear to revolve around a general theme of being / feeling apart from others and those states of being and feeling that are impossible to separate from one another; for example, dreaming, being asleep or fantasising, all states in which one’s identity and sense of isolation or aloneness can be forgotten, even if temporarily, or brought down. Additionally the word in each title of each song appears twice in the song, and the reiterations of the word, their relative positions in the song, whether one is sung higher than the other or is spoken, help to stimulate and open up creative possibilities and tension.

Odd that such a minimalist recording as this really focuses the attention and directs it, far more so than works boasting many layers of texture and mood.