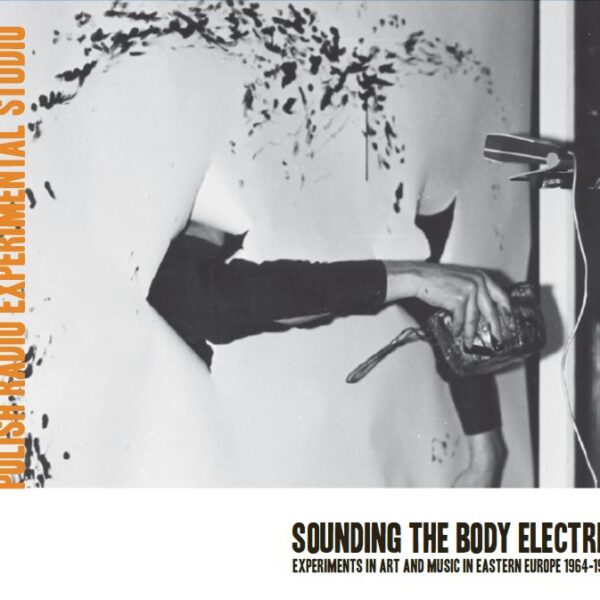 ‘The question of what a sound might be or where it might be heard was… given heightened significance in Eastern Europe, where censorship operated and communications were under official command.’ – David Crowley

Released to augment the exhibition Sounding The Body Electric, this compilation is subtitled “Experiments in Art and Music in Eastern Europe 1964 – 1984”. What immediately strikes me is that its selections are exclusively from male artists and composers. Perhaps it is representative for a time “…in the aftermath of Stalinism…” but before gender equality became a possibility in Eastern Europe? Poland has produced female composers, for example Krystyna Moszumanska-Nazar – although admittedly people like Joanna Bruzdowicz, Marta Ptaszynska or Elzbieta Sikora are from later generations – thus we are to assume none ever worked within Polish Radio Electronic Studio (PRES), which is the focus of this project. The above quote from David Crowley is taken from a review of the exhibition in Art Monthly by Teresa Gleadowe, which you can read here.

A substantial booklet in both Polish and English comes slotted into the fold-over double digipak sleeve, with an introduction by Michal Libera (Libera is co-producer of a cd series dedicated to PRES) and Michal Mendyk, and there are essays by David Crowley and Daniel Muzyczuk. Brief overviews of each piece of music are also contained within the booklet.

Just Transistor Radios is the result of an alliance between an artist: Krzysztof Wodiczko, and a composer: Szabolcs Estényi in 1970. The version included here was re-recorded in 2012 at Sztuki Museum in Lodz for the exhibition. Perhaps a recording of the original performance at the Music Gallery in Warsaw does not exist: it seems a shame to represent a piece which in the booklet is described as “…a political provocation. At a time when radio waves were subject to strict control…”, with a modern-day version which includes the generic vacuous commercial pop radio which didn’t exist 45 years ago. Without the context of the content of the 1970 Polish airwaves, the recording presented here simply doesn’t make sense. Wodiczko was a political artist; in 1985 at the height of South African apartheid, he projected a swastika onto the façade of South Africa House from his art installation at Trafalgar Square, to protest the South African government’s petitioning of the British for funds.

Another re-version, or modern approximation follows, this time of Wojciech Bruszewski’s Junction rerecorded by Wiktor Skok in 2013 at the same location in Lodz where the original 1973 recording was made. Unsurprisingly, this sounds like any of the many current field recordists in urban mode; parts of Yiorgis Sakellariou’s recent collaboration with Roel Meelkop, Rotterdam, springs to mind.

Recorded, possibly on numerous occasions, indoors and outdoors presumably, during a period between 20th March and 22nd April 1984, Music Within and Outside by Collective Actions is described as “…field recordings of tramways became a pretext for a performance.” Like Junction, Music Within and Outside is akin to something you might expect from the current genre of Field Recording. For purists, the engine note of modern cars in Junction may be off-putting, but as Music Within and Outside is presented here as the original 1984 recording, there are no questions about authenticity or the intentions of the composers/participants.

Three pieces of 1966 vintage from Eugeniusz Rudnik next under the title Scalars – technological study demonstrating the possibilities of tape manipulation. Rudnik’s name pops up a few times on this compilation, as recording engineer or performer. Alongside Arne Nordheim, he was a recipient of many high profile commissions: Solitaire (1969) – which was made for the opening ceremony of the Norwegian Sonja Henie Onstad Art Centre, plus pieces created for the Scandinavian Pavilion at the 1970 Osaka World Exhibition (in which six loops of varying lengths would – if uninterrupted – not regain their starting points together for 102 years), and an interactive sculpture for the blind rehabilitation centre in Oslo. Interestingly, Rudnik began his career at Polish Radio as manager of the tradesmen who worked on and maintained the buildings. From there he went on to Experimental Studio at Polish Radio and then Studio for Electronic Music at Westdeutcher Rundfunk before working with Karlheinz Stockhausen, Peter Kotik and Nordheim. Today, he is he is a lecturer and, bizarrely, a juror of movies and journalism competitions.

The inclusion of Shozyg by English composer Hugh Davies on this compilation will be no surprise to anyone who is aware of his 1968 catalogue in which he listed the results of his research into all contemporary electronic works, although it was to me – I knew of him through his involvement with Music Improvisation Company alongside Derek Bailey, Jamie Muir, Evan Parker and Christine Jeffrey. Shozyg (1964) was recorded at Polish Radio Experimental Studio, performed by John Tilbury, Bohdan Mazurek, and the ever-present (on this compilation at least) Eugeniusz Rudnik. Interestingly, for a time, Davies worked for Karlheinz Stockhausen as his personal assistant and also performed in Stockhausen’s live ensemble. The whirrings and scrapings of Shozyg predate the clockworks and detourned consumer electronics of present day South Korean artists like Hong Chulki, Choi Joonyong or Ryu Hankil.

On the second disc there is less emphasis on performance in a gallery context and more on music produced by studio techniques. According to the booklet, Czech-born Canadian Rudolf Komorous “…developed a concept of composition based on a geometrical surface which was supposed to be governed by the same rules that applied to painting.” Tomb Of Malevich (1965) is a tribute of sorts to the Russian Suprematist painter; an electronic tone poem with occasional electro-acoustic clangs and backwards tape effect.

Two versions of Arne Nordheim’s Ode To Light (Sculpture) are included. Ode To Light (Sculpture) studio mix one features echoed percussion sounds and synthesiser or electronically-derived crackling. Bowed cymbal emulation, a procession of disparate analogue electronic sounds and effects which in 1968 would have undoubtedly been ground-breaking and not a little startling in a Stockhausen-y way; today, although in no way unpleasant to listen to, have a similar effect (on my own tired mind at least) to scrolling through the pre-sets on any half decent keyboard synthesiser. Toward the end of this 10 and a half minute piece there is however, a very pleasing treated organ drone whose presence goes a long way to alleviate this listener’s reservations. Ode To Light (Sculpture) studio mix two is a longer seventeen minute version and is more percussive. Cymbal or gong-like noises that meander along at fairly subdued volume. But Nordheim is not scared of including some brutal and loud sounds as well. Some sounds are pushed hard into the red, with pleasing effect thanks to the high quality analogue recording equipment used in 1968. Around 10 minutes we are treated to a filter-swept and echoed monosynth fizz, the kind of effect Hawkwind were to make their signature sound in their live shows for the next 45 years. Drawing the compilation to a close, Milan Grygar’s Acoustic Drawings (1974) are a fascinating audio documentation of this artist’s performance art sound-works.