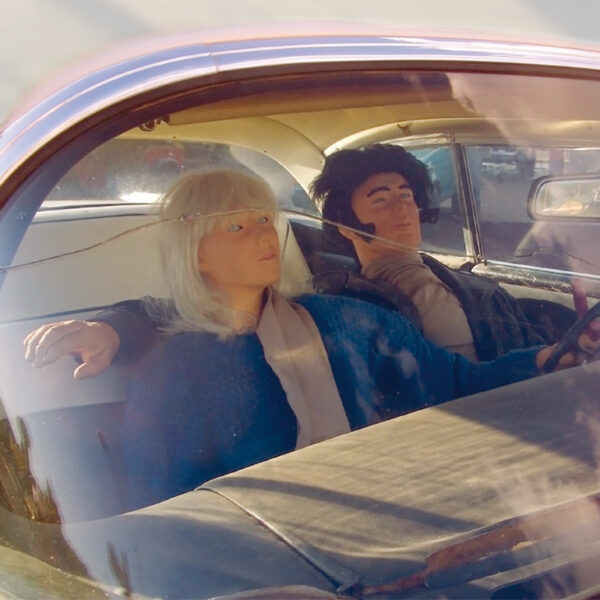 A pleasure to get a newie from Fred Bigot, who impressed us heavily with that 2009 compilation on Holy Mountain Mono/Stereo from 2009, a disc which compiled a handful of his much earlier 12-inchers from 1999 and 2000. Since we’re firm devotees of the Rockabilly genre, Fred’s reverbed and meaty guitar riffs combined with electronica pulsations proved an irresistible mix of lean, mean and slightly nasty twangification, propelled by modernist beats, and with a slightly nasty darkened edge hanging over all…but La Voix de la Route (LES DISQUES EN ROTIN RÉUNIS / NO SCHOOL TODAY LDRR#048) is quite a different quarter-pound of beef. The A-side’s ‘Bon Voyage’ is the immediate audience-pleasing grabber, but even this is less a sampling of his Rockabilly riff chord book and more a knowing dip in the water of very well-known Krautrock tropes, including borrowings from Kraftwerk and Neu!…it’s got oodles of what muso-journalists are fond of calling that “motorik” vibe. In this context, the three tracks on the B side are much more experimental, forming vague sound-pictures out of throbbing reverb drone effects, voice vocoder chants, sound effects and field recordings, and just plain odd assemblages of tape cut-ups. Clearly, as car records go, we’ve come a long way since the innocent days of the Beach Boys and their ‘Little Deuce Coupe’…this particular roadster is fuelled with irony, humour, and lashings of lead-lined darkness. Plus there’s nobody at the wheel and we don’t know where we’re heading.

Matter of fact the entire disc makes references to American highways and road trips in both titles and sounds, and even the cover art features two dummies relaxing in the back of a chauffeured futuristic buggy…that’s because this record is in fact a distillation of Bigot’s 2011 road-trip across America, a funded art project which he undertook with money from the Institut Francais, and an exploit whose other published statements included weekly sound reports, an installation, and a performance by Werner Hirsch, whose voice is sampled on two tracks here. Oddly enough, the Discogs entry for this release tells a slightly different story and proposes this album is the soundtrack to an art exhibition called “Sur La Route (au hasard)” created by Arnaud Maguet [1. Maguet’s career shows he is one who “questions the basic aspects of 1950s to 1970s subculture”, whatever the Heck that means.] in 2014. So now I’m confused [2. It doesn’t take much.]. At any rate, Maguet provided the cover to this release, and that is beyond dispute. It’s a powerful theme to be sure (European take on American road myths), but hasn’t this been definitively explored by Wim Wenders in the 1980s, and possibly even by Jean-Luc Godard before him? No matter, since Bigot – whom we haven’t heard from since 2012 as one half of Melt Famas – has turned in an exemplary and entertaining disc of art music. The B side of the vinyl is noteworthy for using parallel grooves, so you never know what track you’ll hear when the needle drops. Arrived 12 September 2014.