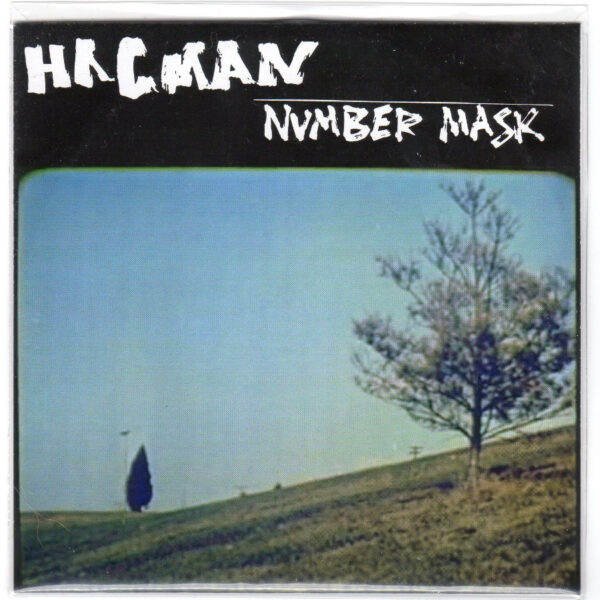 Number Mask (LF RECORDS LF037) is the debut album by Hagman, following after a number of singles / MP3 releases released since 2012 on the Sheepscar Light Industrial label based in Leeds. The duo of David Thomas and Daniel Thomas do it by facing each other in a surly fashion over a table packed with electronic equipment, although once the confrontation gets underway, they lose eye contact with each other and focus all their attention on the effects pedals, drum machines, power generators and miniature pylons that bristle like angry chessmen on the board. Instead of an electrified power-attack however, their reconstruction of the art of war involves intense and long moments of sullen sulking and brooding, wearing down the enemy through tension and attenuation. Imagine two generals looking at each other across opposing hilltops through binoculars, each struggling to guess the next move of their enemy. Music-making rethought as a state of siege.

On this album, the two standout tracks for me are ‘The Solar Factory’ and ‘The Tower Revolving’ – in title, sound and execution, these are perfect realisations of the Hagman plan, compelling episodes full of subtle tension where the suffused sense of stress, pain and endurance never lets up for a second. They are tiny monuments of understatement and smothered emotions. Oddly enough, ‘A Sequence of a Short Dream’ is just plain ambient droning by contrast, an experiment that never quite finds it way and simply leads into a dead-end tunnel of hate. But ‘Neotenic’ is another sci-fi dystopian gem, suggestive of badly-made flying cars malfunctioning as they float sputteringly across a poisoned grey sky, and ‘Guiseppi’, while short on ideas, is a fascinating growler propelled along mostly by its deliciously abrasive textures. If some musicians would like to see themselves as architects of a grisly 25th-century city that imprisons the populace, it’s likely that Hagman will be given the job of surfacing the pavements of that city. This release indicates what a good job they would make of it. From 25th September 2014.