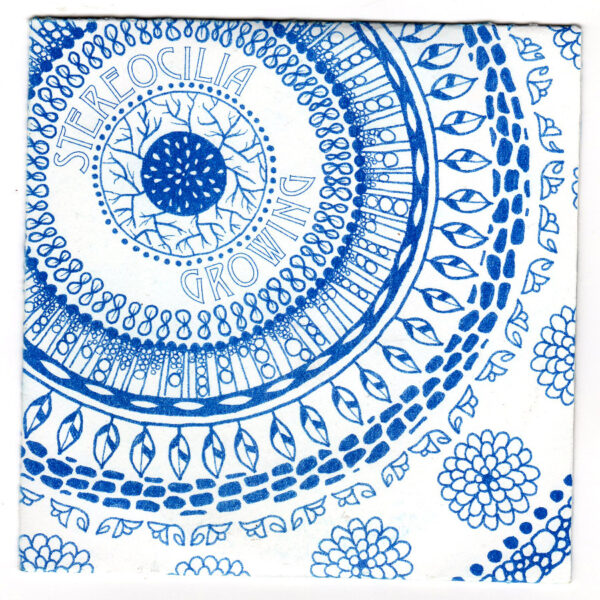 Last heard from Stereocilia (i.e. guitarist John Scott) with his 2013 Murmurations album, which Paul Morgan found had a lot of resonances with the “shoegaze” genre of indie rock. Scott himself may not thank us for that particular comparison, and prefers to think of himself as a composer and guitar player, and clearly there is a lot of care and deliberation in the performance and the assembly of the music heard on Growing (ECHOIC MEMORY EM002), his new three-track EP. He chooses his equipment carefully, he experiments with tunings, and he is always ready to try out new fingering techniques; and the music we hear was edited down from (presumably much longer) improvisations, to present us with distilled Stereocilia in its most concentrated form.

Pleasant enough; for me the main barrier to complete happiness is the generally tasteful aura and overly smooth surface sound, which turns these heavily-patterned and intricate drone works into a rather numbing experience instead of the hoped-for trance-like state of meditational perfection. Scott is content to remain in the same major key for a very long time, patiently noodling away, without much to show by the end of his excursions. The more I listen, the less I hear in the way of bold experiment or adventurous risk-taking; instead, this music presents the image of a chef lovingly stirring and restirring the same pot of sauce for over 15 minutes, when you wish he’d just hurry up and pile it onto your plate, already.

That said, there is some development in the long track ‘Collapse’, which does encompass moments of satisfying release and produces memorably poignant combinations of layered drone (everything’s so diffuse I hesitate to use the word “notes”). It’s not quite as dramatic as a collapse, however, and more like a gradual washing-away of some wispy clouds of smoke in the air, leaving a near-blank canvas as they disappear. From 11 September 2014.