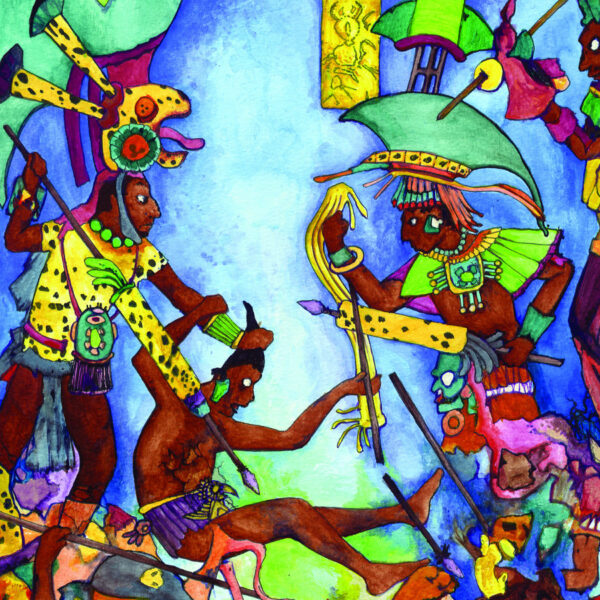 One of the hardest-working musicians in black metal has to be one Edward Ramirez, the chief mover (I’ll say!) and shaker of that group of southern Californian bands known as the Black Twilight Circle whose inspiration is pride in their Mexican-American heritage – in particular the mythology and belief systems of the Aztecs and Maya. Ramirez has a hand in several BTC bands like Acualli, Arizmenda, Blue Hummingbird on the Left, Kuxan Suum and Muknal. With such a wide-ranging involvement on his part, and usually playing on all instruments, it goes without saying the bands are much the same in style and sound, and the differences among them are in their lyrical subject matter. Volahn’s particular interest is in celebrating the gods and worldview of the Maya (Ramirez has part-Mayan ancestry), and the place and journey of human souls towards enlightenment within this ideology. “Aq’Ab’Al” itself explores the dark passages that the soul needs to traverse to achieve transformation and enlightenment.

The music is usually fast and furious to the point of bloodthirsty derangement and even beyond, but there is also deeply felt emotion: in many songs, melancholy, longing and a sadness too intense and deep for words to describe are present. A song can begin strongly and aggressively with screeching, howling vocal – Ramirez’s motto must be “why sing when you can scream?” – and continue this way for several minutes; but as the music progresses, the mood changes and a more reflective, sadder state follows. Result: tracks can come in with a roar and go out quietly. Volahn’s style is raw, unadorned black metal, heavy on frantic vibrato riffing, with guitars, percussion and vocals out of whack with one another, and everything on fire. Ramirez’s singing usually is cloaked in thin dark cold echo and as a result there is a slight cavernous and dark edge to the songs.

One of the more enigmatic pieces on the album is “Bonampak” which for the most part is the usual scorched-earth blast of guitar rage and vocal screecherama but then ends unexpectedly with a beautiful melody of acoustic guitar and flute that captures the feeling of closeness to and wonder at nature in its tropical glory. “Quetzalcoatl” which follows is a bit more distinctive than the others with brief shrill lead guitar motifs and a bluesy feel near the end. Sometimes when I listen to the album, I have the feeling that Ramirez played more or less continuously and then cut the music into six parts as songs seem to take up music, ideas and moods from preceding tracks.

Listening to such relentless music over nearly a whole hour can be very wearying; the highlights start coming about halfway through the recording with unexpected quiet flourishes of acoustic music that have a flowing Latino quality and possibly some flamenco guitar influence, after the otherwise chaotic excess of runaway guitar, screaming voice and drum battery. The intense overwrought delivery might not suit everyone and can even be a turn-off, and maybe Ramirez could have tried to sort the stream-of-consciousness music into more definite songs. For sheer power and manic fervour though this album is hard to beat.