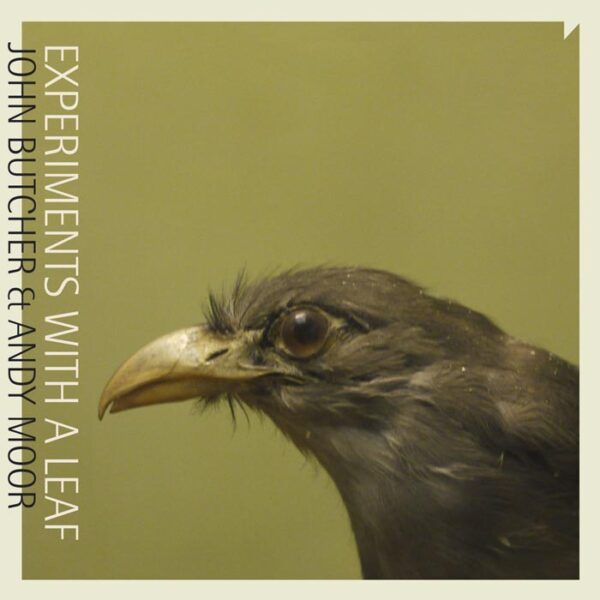 Ever alert for the call to action, saxophonist John Butcher whips it out for 30 minutes of pleasant roaming in the company of Scottish guitarist and Unsounds label co-founder Andy Moor; the set immaculately recorded at Switzerland’s >> zoom in << Festival, in October 2013. The pair have entered one another’s discographical orbits on previous occasions, though Moor’s contributions tend to have been photographic rather than instrumental, and it is to him that this recording owes its avian-themed sleeve. Quite fittingly then, Moor abhors remaining grounded, and the set’s more dramatic excesses are his, from the (polite) crunching of feet on the welcome mat in the doomy, lumpy ‘Five Eyes’ to the grumpy growls that resonate through sinking-ship centrepiece, ‘The Tongue is a Flame’. Ever the statesman, Butcher gives benevolent decoration, self-assuredly permitting his partner to cut loose. All told though – whether because of familiarity or the brief set-time – one senses that neither party aims to blaze any trails, the result being more postcard than painting, though there’s nowt wrong with that in my book.

Aplomb: A pithy and fitting title indeed; more telling of the contents than the copious sleeve notes, which manage to say less about these two musicians’ three-odd decades of friendship than the startling sounds within 1. The long-running collaboration of saxophonist Michel Doneda and percussionist Lê Quan Ninh (responsible for the above notes) is hewn into the grooves of the many astonishing twists and turns rendered in the pair’s idiosyncratic tongue – the language of years of intrepid interaction; their supple manoeuvring in even the murkiest of conditions ever to the (vanishing) point and beyond. Ninh sets tone with a whirlpool of thunderous atonality –ripping the very guts out of whatever he’s on at the time (notes helpfully inform us ‘percussion’), or else clattering erratically like shipwreck on rock, which traumas Doneda navigates like an experienced swimmer, responding in alternating modes of distress and warning to less wary wayfarers. No slouch himself when it comes to the personalisation of his instrument’s sonic potential 2, his soprano sax seems to double (or triple) up as one of any number of obscure yet fine-bladed implements that cleave as easily through the maelstrom as the tenuous calm to which the pair retire between bursts of inspiration, emerging only capriciously into distinct form. An intriguing chapter in the pair’s on-going story, and one that incites deeper investigation.

Second album from Italian sound artist/composer Alessandro Bosetti and Australian pianist Chris Abrahams (The Necks) finds them joining dots between spaces lyrical and impersonal during their symmetrical improvisations and renditions of Steve Lacy and Milton Nascimento. Over the course of their brief working relationship the pair have developed a lightness of touch, and several pieces see the pair quite at ease at low volumes only to veer into more anxious states when least expected, as if to invite contemplation one moment and thwart it the next. Abraham’s beguiling and occasionally delicate lines occupy the attention, at play for the most part upon the merest of electronic effects; soothing, cellular crackle in ‘Eye’ yet cascading wildly over a threatening, industrial aero-drone in ‘Greenhouses’. To the careful balance are added Bosetti’s lyrics (in English and French), during a cover of Lacy’s ‘Esteem’ (the vocals recalling David Toop’s fragile turn on ‘Do the Bathosphere’); and more brittle delivery on ‘Bridges’ which doth warble and crack a little too much for my comfort – in the same way that the title spoils the pleasing geometry of the cover art – though it is as expressive of the mediated tension between disciplined and freer expression as anything else here.

Hitherto noted as part of the tidal improv/jazz trio, ZOOR, saxophonist Bertrand Denzler and drummer Antonin Gerbal pair off on Heretofore for a scene-shifting 35-minute piece consisting of a series of brief, tangentially related, low-lit exchanges drawn from a conventional sonic palette. Expressing a similar disinclination towards drama as heard on the slow-burning ZOOR’s, Denzler’s tonal explorations cover well-charted terrain and are sparing with the rations, treating our ears only briefly to some pleasing, low register lunges that strike the near-silence like a sudden rock fall. Meanwhile, Gerbal’s drums – previously the driving force behind ZOOR’s long-form outings are markedly desiccated and directionless for the most part, more appealing in their sparser aspect (as in the soft brush patterns of the opening section) and the overall effect is of a rehearsal rather than a performance; of two musicians sounding each other out rather than sounding off. It’s a peculiar aesthetic, and seems to be a running theme for these fellows.