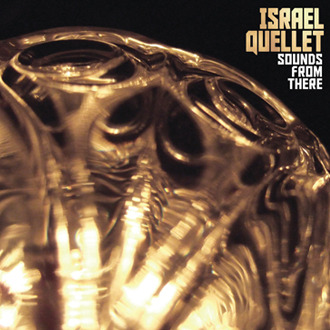 For this album, his fourth, Swiss multi-instrumentalist Israël Quellet sets up shop in a church (well, figuratively perhaps: the album does include “church ambience”) along with various tools of his trade which include timpani drums, an organ, a Tibetan horn, tubular bells, church bells and a metal tank. I presume he also ensured that there was enough space for sounds and their echoes to float through the air to give the recording that slightly dark cavernous ambience. Together with another musician, Quellet then proceeds to drum up sonic sculptures of vaguely sinister tones and sinuous textures. The soundscapes seem very huge and ominous, and quite remote as well, so they appear even greater in the shadows than they would be in the light. The volume level is very even which might be something of a disadvantage here; this is all instrumental electro-acoustic improv, hard to connect with and remember, and some variation in volume level might have been welcome to set one track off another. For this reason among others, the album comes over as more of a travelogue through distant exotic lands than as a natural progression through an introduction and four movements.

The recording proceeds very smoothly without much abrupt surprise, and a listener could be lulled to sleep by some tracks – especially the last one where for a large part of it some curvy smooth stone bowls roll and grind around with no destination in close sight. There are occasions where the music seems to have a mechanical quality that I think is unintended.

While the album is technically very good, I feel it could have been much better if Quellet had played the music live in a cathedral setting rather than in the studio: his own emotions at playing in a particular space would have informed his performance, and listeners would feel some of that awe and respect.