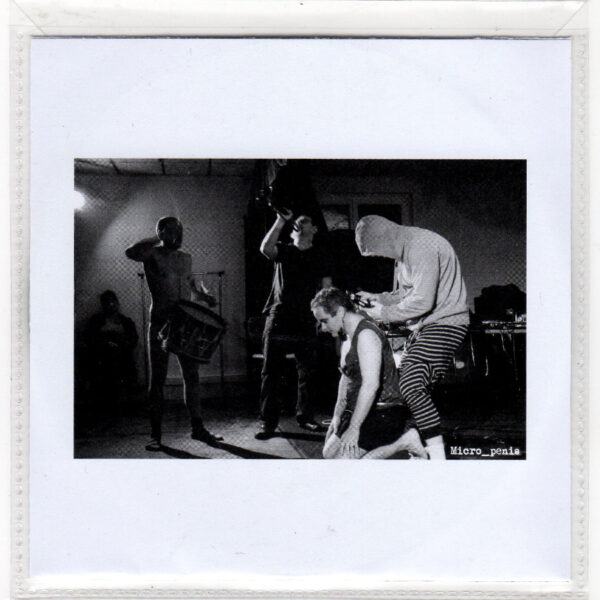 Once again the team of François Heyer, Alexandre Kittel, Claude Spenlehauer and Sébastien Borgo – known collectively as Micro_Penis – comes forth to darken our sunny daydreams with nightmares of noise, ugliness, and all that’s grotesque, absurdist, and unsettling. Der Trompeten Sauber (CHOCOLATE MONK CHOC 268) occupies slightly over one half-hour across its two extended tracks, but contains enough toxic insanity to last you a lifetime. Their previous monstrosity from 2011 called Tolvek has been the subject of much international uproar, is in direct violation of obscenity laws across most of mainland Europe, and Interpol have put their best detectives in charge of tracking down the infamous Ogrob, leader of these despicable infamies. While Tolvek was an unwelcome exploration of the darker side of the human sexual psyche, Der Trompeten Sauber is pretty much a musical and aural hymn to the joys of fellatio…the subtitle conceals it using the German word schwanzlutschen, but the rest of the record makes no bones (and I use the word advisedly) about making plain its preoccupation with “smoking the skin cigar”.

As they did with Tolvek, Micro_Penis work very hard to portray sex as a joyless, unpleasant, visceral and even life-threatening experience, and the horrifying sound-music melange that emerges is full of screams, painful eructations, whistles, gulps, barks, and the sense everywhere of writhing bodies going through the motions as if possessed by the Devil. The lubricious “slurping” noises on track 1 are just plain nauseating. The occasional triumphant trumpet fanfares are completely parodic in this context, openly mocking the notion of “sexual prowess”, and can be read as a rude salute to the man who fails to get an erection. We get the same queasy feelings from the deliciously ironic “easy-listening” musical passages that are used to frame these sleazy episodes. You couldn’t wish for a more extreme take on La Comedie Humaine, and one that’s underwritten with oodles of jet-black humour and lashings of l’esprit Gauloise. What the Red Noise Sarcelles – Lochères LP did for toilet humour, this LP does for the blowjob…finally to top it off, we have the cover photograph by Pierre Chinellato which depicts the band in the midst of some surreal musical theatre which, you have the distinct certainty, will turn into a prime piece of 1970s Swedish porn any second. A repellent, but powerful, record. From 14th October 2014.