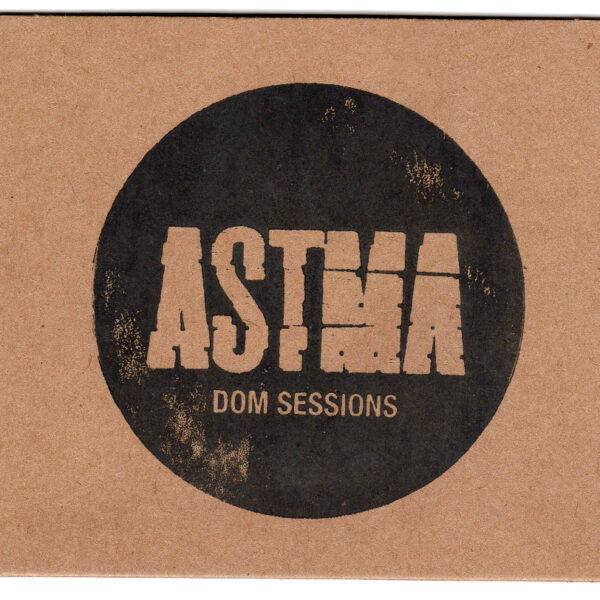 Much to recommend the highly abrasive Dom Sessions (MOOZAK MZK#007) album of strange and grim art music spewed out by Astma, the trio of Alexei Borisov, Olga Nosova and the famed Finnish musician Anton Nikkilä, a long-time collaborator of Borisov. All-improvised, no overdubs, a deliciously filthy recording…the three of them did it at the Dom Cultural Centre in Moscow as far back as June 2009. I’d like to think of this “Cultural Centre” as being not much more than two rickety chairs and a broken coffee machine, and while that’s not being at all fair to the thriving Russian underground scene, that is the general vibe of wretchedness that I’m pickin’ up from these great angstified tracks of brooding grime. 1 It’s almost a form of rock music, considering there’s guitar-playing, drumming, and singing taking place, but for the most part all the above are performed in a mystifying, troublingly weirded-out manner, where the three participants alternate between happy rejoicing and outright despair; real manic-depressive mood swings, taking place in real time in unpredictable spurts of emotional blurtage. The sound of the album is also uncanny; there’s plenty of beautiful lo-fi distortion to add to the noisy surface, some of it achieved by use of the dictaphone to create muffled alien voices, some of it perhaps due to choice of amplification and microphone placement. It’s a highly personalised take on the “grunge” aesthetic and entirely suiting to Astma’s music, the electrifying sound of pure alienation as it passes through the body like a spasmodic electric current.

Olga Nosova, who personally sent us a copy of this great album from her home in Freiburg, is a phenom here with her spooky, plaintive singing. It’s another instrument; it grates on the inner bark of the ear like a broken synthesiser, phoning you up through a faulty telephone receiver at 3AM. I’m lost for comparisons when it comes to trying to convey this unearthly wail. I’m just glad I can’t understand what she’s saying or singing; if I could, next stop for my head would be the inside of my gas oven, probably. Considering this feisty shrieking dame is also doing the drumming, some pundits might be tempted to dub this trio the Harry Pussy of the Eastern Bloc…not me though. The next thing to come to terms with is the guitaring, but it’s a tough call to hand out a best-in-show prize since both the guys in the band are grinding their gourds like two sweaty woodcutters…both of them manage to concoct an ugly, corrupted sound from their amplified strings, throwing out atonal blues-influenced long-held notes, and effortlessly achieving a miserable effect for which Loren Mazzacane Connors would give his whammy bar. The listener’s heart responds with instant despair when hearing this grim, black, sound.

Then of course there’s the bitter crackling of Alexei’s TB303, a Roland bass synth which he’s co-opted back from the world of Acid and Techno and is now re-applying it to punctuate this uncanny art music with tasty little poison-bites throughout…Borisov I think is also supplying many of the troubling ghost voices which exist here just on the edge of perception, coming in like unwanted interference from a radio or TV set permanently tuned to the “Dismal Documentary” station, feeding further layers of information into the bubbling lasagne of noise. Last heard this exciting combo with a 2012 live performance documented on a split tape by Spina!Rec, and of course their eight-minute exploit Tickling Valmiera where they were joined by Edgars Rubenis on a live gig in Latvia in 2011. However it’s this Dom Sessions record which has finally tipped the balance for me. Seek it out. From 9th October 2014.