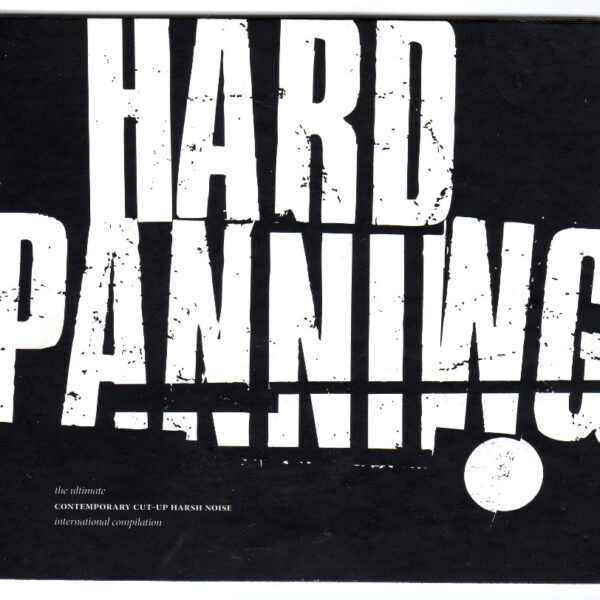 The Hard Panning (TRIANGLE RECORDS TR-53) record announces itself as “The Ultimate Contemporary Cut-Up Harsh Noise International Compilation”, an assertion which I’m not prepared to argue with, but I do take exception to our modern society’s over-use of the word “ultimate” which plagues us like a rash, almost as much as the pointless use of the word “literally” which Londoners for some reason always pronounce “litchly”. Quite often I pass an eatery called “The Ultimate Burger”, which litchly makes me think I’m going to expire instantly if I so much as took one bite from their meaty buns. Will Hard Panning prove a lethal listen too? Certainly it’s an aggressive, pumped-up experience, where the noise assaults you from the first second and very little relief is offered to the pummelled victim across 16 tracks of pain. Broadly what strikes me so far is the way these guys embrace sheer chaos and inchoate shapelessless with a passion…little of the influence of Merzbow, with his attempts to pattern the lengthy bouts of racket with some form of pulsating undercurrent, is in evidence. Instead it’s all untamed feedback, fed through effects pedals and mixing desks, where the knobs are twiddled at tremendous speed to make an excessive process even more excessive and insufferable. Even the title of the comp refers to knob manipulation…”hard panning” is a mixing desk action which I gather involves turning the stereo balance 100% to the left or right channel. Presumably the noisers here use this strategy to achieve maximum shock value, rather than the nuanced “spacey” effects which most studio producers associate with the term. Facialmess (an English noiser based in Japan) and Ontario’s Jake Vida, for instance, are keen on spraying the crowd with machine-gun fire, their wild use of digital delay producing a virtual mitraillette. Texan fellow T.E.F. and 1990s Japnoise veteran Kazumoto Endo smother us with alienating fuzz which keeps changing and growing at an alarming rate, unstoppable in its Blob-like plan to consume the world. Jaakko Vanhala’s ‘New Mythology’ is also a destructo-fest, settling for nothing less than obliteration of a capital city by means of nuclear-powered bulldozer.

Kazuma Kubota (also known as Bloody Letter and The Cracked Mirror) is one excellent stand-out, with his dual-layered approach; he starts with a mysterious drone which in places resembles eerie mood music from another planet, thus affording one of the more serene moments on this raucous album…but ere long he adds a secondary layer of harshness, biting into his own creations and hacking into the forests of his domain. Violent and strange. We’ve also got the splendid Maaaa, the angry Vegans from Russia and Poland who I think are husband and wife and I imagine always dress in vegan black leather, even for pajamas. Their ‘Utmost Restraint’ may be intended as an ironic title, but they’ve got oodles of dynamic energy which propels their liquid firework display forward as surely as a gigantic ball of dung rolled by two dung-beetles. The team of Riccardo Mazza and Matteo Castro, known as Lettera 22, are in fact quite restrained, their ‘Tolerance’ skating by with the calm of a rusty sabre dragged across the human ribcage and producing one of the more unsettling episodes in an album packed with harsh noise blasting and screaming.

Also here: Purgist, Deafault (from Adelaide), Ahlzagailzehguh (American blaster also called Stroma), Developer, Mantichora (I think from Poland, a very moralistic creator of industrial noise cassettes with titles that read like stern lectures against the moral lapses of the world), the Italian creator Encephalphonic (Emanuele Bonini), and the famed long-serving genius of noise, K2. K2 is Kusafuka Kimihide and has been doing it since the early 1980s, and used to run a label called Kinky Music Institute. I wish I had some of his records, but all I’ve got is a copy of his 2011 split with Maaaa, on the Polish label Triangle Records. By the way Triangle Records co-released this item with Somnolent Shelter Records, and it was “curated” by Sergei Hanolainen and Dawid Kowlaski. A great slab of retro table-noise to cause havoc in your region.