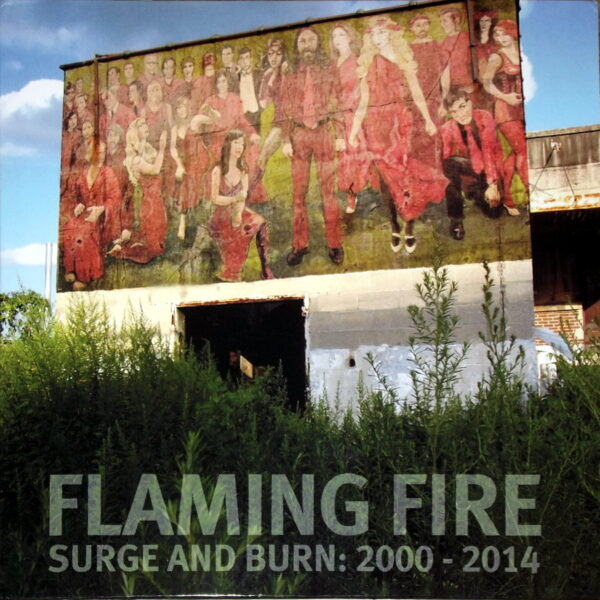 Very happy to receive the double LP from Flaming Fire, a vinyl collection called Surge and Burn: 2000-2014 (CUNIGLIUS RECORDS CUNG18), a thick and heavy package which also arrives with a lengthy full-colour art zine of writings, photos, gig posters, and paintings…we’re very keen on this Brooklyn band and over time we have probably played all the cuts from their 2007 album When The High Bell Rings on the TSP radio show, plus we always enjoy hearing their contribution ‘There Is A Sky’ (included here, by the way) to the comp Space Is No Place – a sort of demented Native-American rain dance chant aligned with primitive electronic music. I kinda assumed they were enormously prolific, when in fact there aren’t that many records available – just two full-length albums before that 2007 item, and a split single on Milkpal Records. Perhaps what comes over is the sense that what they do is just too large and unwieldy to be represented successfully on vinyl, a larger-than-life band that can’t be comfortably accommodated on records. Certainly what most listeners respond to is the spectacle of the band, especially performing live, which appears to be a freaky rock-and-roll circus experience that is probably enormously entertaining, slightly dangerous, and joyfully overpowering. For now, all I’ve got to go on is the photos in this double-gatefold and the many images printed in the zine, but just look at the red and purple outfits, the masks, the togas…the sense of faux-ceremonies being enacted with Patrick Hambrecht as a bearded charismatic leading the ritual…the general demeanour of demented fun. A post-punk take on big band music rethought with exuberant lady vocalists, crazy outfits, and rock guitars…a pocket-sized version of the Arkestra, almost.

At the front of the band are the vocalists Patrick Hambrecht and wife Kate, along with the cartoonist Lauren Weinstein, but it’s probably also fair to credit these three with the visual identity and conceptual force behind Flaming Fire, much like Fred Schneider was much more than just the lead vocalist for the B-52’s (with whom Flaming Fire are often compared). The printed credit list to this release includes a sizeable roster of sidemen (and women) playing bass, guitars, percussion, keyboards, etc., but I think this mostly represents the turnover and fluid line-up of the band, which is always described as a “collective”. The music we hear across these four sides is not really the sound of a big band at all…a lot of the songs are propelled by simple drumming and keyboard arpeggios, and if there’s a Flaming Fire signature sound it’s certainly not overwhelmed by an excess of instrumentalist show-offs, guitar soloists, or synth-wizards preening themselves with their unusual settings. The vocals and the songs are the main thing; all that’s needed is some fairly basic instrumental settings to showcase them.

As to these songs, the tunes and chord sequences may not be especially memorable or inventive, but the actual singing is what wins me over every time. It’s done with such conviction, no matter how absurd or ridiculous the lyrical themes may be. The singers never once crack a smile or try and share a joke with the listener; none of that post-modern irony which might sour the deal. Lead singer Lauren Weinstein in particular has a perfect deadpan delivery along with a lot of warmth to her singing, and all the vocalists have an identifiable style and force which is brought to the fore. Alone among the so-called “New Weird America” bands from this period, Flaming Fire haven’t concerned themselves with strange sounds or generating endless strumming jams of clattery noise, nor striking journalist-friendly poses in line with “hip” record collections full of Krautrock LPs, but instead have built and crafted a unique species of underground show business. Old-fashioned ideas like “entertainment” and “engaging the audience” and “enjoying ourselves” come to mind.

The press release describes the musical odyssey of this band as “evolving from a Greco-Roman choral band backed mostly by backwards tape loops to a fiercely demented rock band….to a psychedelic space-rock group”; and also reminds us of the old-time religion vibe that Flaming Fire cultivate, happy to be perceived as an imaginary rural cult with Patrick Hambrecht as their charismatic leader. The Old Testament-styled painted banners photographed in the zine are an index of this, a superb comic-book freakoid update on Bible stories enriched with psychedelic colours. Seven unreleased tracks on this double LP survey, received August 2014, warmly recommended.