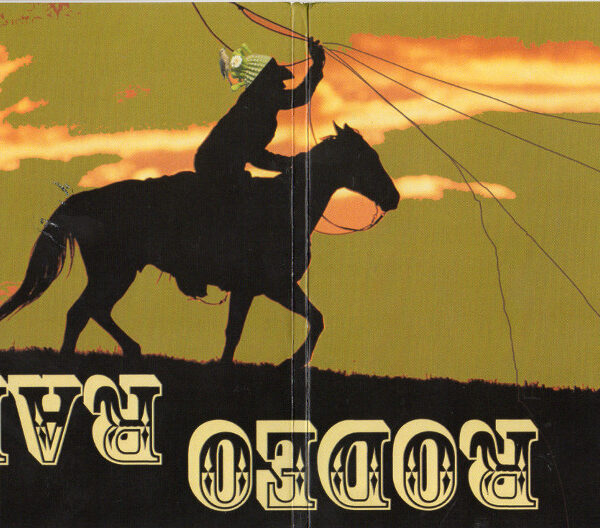 A true one-of-a-kind experimental composer is French outlier Emmanuel Mailly, whose La Dynastie Des Polygones impressed us muchly in 2012. Now from 23 December 2014 we have Rodeo Ranger (NO LABEL), eleven home-recorded cuts which he describes as “Western music”, which could mean either his unusual take on the Country & Western genre, or soundtrack music for Hollywood Western movies – or both – the latter being a promising avenue to explore if it leads to a reassessment of Ennio Morricone’s music for Italian westerns of the 1960s. A friend of mine said “Hey why don’t you use more drum?”, is how the creator describes its genesis. I said ok and wrote RodeoRanger as a soundtrack of a weird western. So it’s noisy but rock/blues with a tuned guitar ( !!! ). The front cover collage may give you more of a clue – the clichéd image of a Marlboro Man cowboy in silhouette has been détourned to show him wearing part of a cactus as a hat, with a songbird perched elegantly on top. Witty, surreal, playful.

Like Dynastie, Rodeo Rangers is another performed record where the simplicity of arrangement, directness of method, and clarity of sound are all very much to the fore. Mailly has a strong facility and a confidence in performing that ought to be the envy of most musicians. No specific instruments are detailed, but there’s a lot of guitar work – including campfire acoustic guitars and mournful slide guitars, both in keeping with the Western theme, and using them in a rather playful manner that turns another potential cliché on its head. Mailly uses these and other recorded layers to create imaginative instrumentals which are refreshing, innovative, and ingenious – even where the arrangements are slightly bonkers and eccentric. Impossible to pigeon-hole it within any known genres of music, especially as the album is so wayward and wilful on its own terms – having picked a “Western” theme to follow, it seems Mailly can’t wait to depart from it and do something different, so we get thumpingly bizarre warpoid “disco” tracks like ‘Red Moon’ and ‘Dirty Boots’ sandwiched in between the more pastoral desert-mode (Paris Texas) Ry Cooder music pieces. It’s great to hear a musician having good honest fun and enjoying himself, while remaining completely true to his creative principles.

While some tracks may misfire slightly for this listener (‘It’s Pouring Outside’, co-written with the Canadian Cathy Fern Lewis, feels rather thin and ineffectual, and the guitar on ‘Blues Solo New’ seems to have lost its way in its own doodling), his best work delivers ideas and sensations that are hard to beat. I would draw your attention to the epic eight-minute workout ‘Lefthander’, which in terms of imaginative studio mixage and dynamics is something that feels like a lost Holger Czukay production (yes, I can offer no higher praise). This is the kind of rare record that makes me glad to be doing The Sound Projector, as I doubt I would have received it or heard it otherwise.