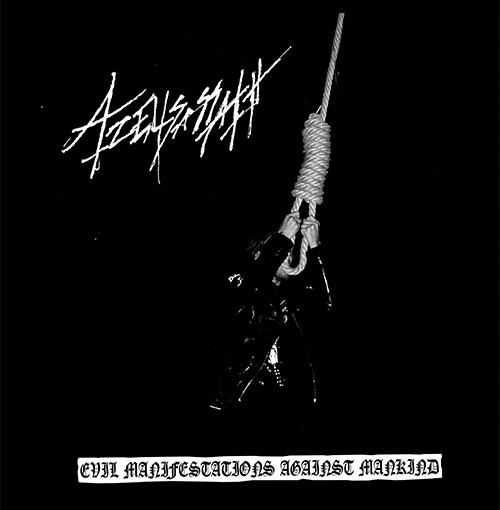 Azelisassath is a black metal project based in southern Sweden that has alternated between having one member and two members. At the time the band recorded “Evil Manifestations against Mankind”, it was one solo project of that one member rejoicing in the name of Swartadauthuz among a few others so the album should be judged with this in mind.

Azelisassath plays very sprawling cold ambient BM with some vocals, and those vocals all but drowned out by the music. On this album, the dominant instrument is the drum kit, leading all the way through and setting the pace for the songs. The deep, spidery voice is left behind – the fact that the singing doesn’t follow the melody or pace doesn’t help – and spends most of its time stranded in the chilly darkness. Had Swartadauthuz left the vocals out, this would still have been a very cold and malevolent album and any temperature change would have been imperceptible.

While the drumming is very good and Swartadauthuz is enthusiastic in whacking the hell out of those skins, the effect is to overwhelm the guitars and synths so that these instruments become no more than an atmospheric and melodic backdrop. Unfortunately, unless forewarned otherwise, listeners can expect that a supposed ambient BM album should be a lot more than just a set of eight exercises in pounding percussion and bashing cymbals. The music sounds as if the drumming sequences dictate the entire melodic direction of the guitars and the mood that the synths must follow. The synths themselves are minimal and limited in their range of tone and mood, and it’s only in the second half of the album that the keyboards approach anything close to their potential in evoking despair and sorrow. The result is that the atmosphere doesn’t change much from track to track and the album sounds as if it should have been one long track without any breaks in-between.

Of course if you don’t mind that the guitars, vocals and synths form a very distant second place to the drums, and you enjoy being swept up by energetic and thumpingly powerful icy black metal and blown out to the farthest reaches of Hell (with Hell being wider than the known universe), then this recording will definitely take you there and beyond.

For all its flaws and its lack of original melodies and riffs, I like the album a lot for its energy and power. But its style and template are probably not something that Azelisassath should follow on subsequent recordings.