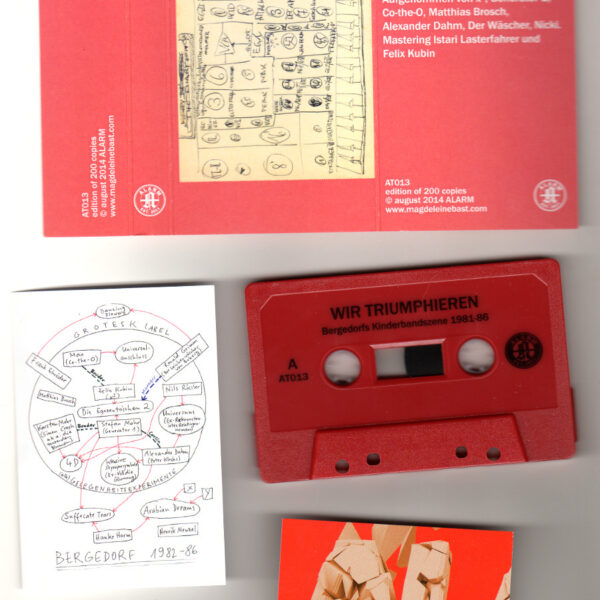 The cassette tape Wir Triumphieren: Bergedorfs Kinderbandszene 1981-1986 (ALARM AT013) purports to be a compilation of early, unheard and unreleased music from the West German New Wave punk-electronic scene…many of them connected to a cassette label called Grotesk…and what’s more all the bands and projects were apparently teenagers and young boys aged between 9 and 15 at the time. It’s a vibrant snapshot of 1980s history, a missing piece in the jigsaw of Neue Deutsche Welle, joining the dots between post-punk rock music and high-powered electronic racket made on cheap Casio keyboards, and a testament to the ingenuity of the unstoppable flaming youths who produced such powerful and entertaining avant-pop music. Or…is it?

I’ll hazard a guess that this is another brilliant hoax / pastiche thing from the mind and fingers of Felix Kubin, the same genius who gave the world Historische Aufnahmen 1 in 2009 on his own Gargarin Records label, an LP pressing crammed with too-good-to-be true “lost” fragments from the history of 20th century culture, such as a David Tudor rehearsal tape and a 1938 recording of the Finland telephone exchange. When the press notes slaver about Casio keyboards, drum machines and 4-track cassette recorders, I expect a lot of audience buttons are being pressed already, but a quick search for any recordings or performances made before or since by Die Egozentrischen 2, Gelegenheitsexperimente, X2, and Universalanschluss doesn’t yield much in the way of results. Did these bands exist? I’m quite prepared to believe Kubin was a child prodigy (as you know, this magazine loves just about everything he does), and years ago he did release records called The Tetchy Teenage Tapes Of Felix Kubin for A-Musik and Teenage Tapes for Minimal Wave – but these may simply be more red herrings, spread in the path to bolster the ingenious fiction.

None of this matters though. The tape is a total blaster and an extremely enjoyable set of super-fast, manic, noisy clattery electronic distorto-nonsense, where for the most part it’s indeed hyperactive and arrogant enough to have been produced by 1980s snotty teenage brats hopped up on sugary cereals and the German equivalent of bags of Monster Munch. Beside Kubin himself, his buddies Alexander Dahm, Matthias Brosch, Ronald Grimm, and Stefan Mohr may all have something to do with this elaborate concoction, be it fake or no. If the former, I only wish there had been a West German band called Der Leichenwäscher Von Boberg, which translates as “The Corpse-Washer of Boberg”. C’mon. No self-respecting adolescent could have resisted snapping up the back catalogue of the Corpse-Washer…and just imagine what the tape covers would have looked like! Red and black skulls, rivers of blood, collages of old engravings, strange runic carvings…from 22 December 2014.