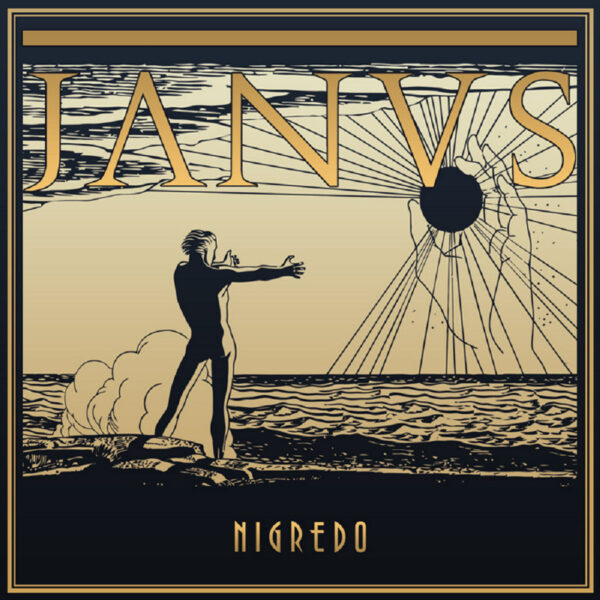 My interest was piqued when I heard that Janvs had re-recorded an early demo “Nigredo”, and not just re-recorded it but left out half the original songs, rearranged the order of the remaining songs and then included a cover of an Enslaved song that the band had done for a compilation tribute. On top of that, a few years have passed since I last heard anything by this Italian band. Of the original songs on the demo, “Abisso”, “Rovina”, “Imperium” and “Suicidio” survive and they are reworked as melodic post-metal / progressive rock epic pieces.

The opener “Abisso” announces the band’s musical revision of “Nigredo” with pounding bass drum and a layered trilling jewel-guitar sound that owes equal debts to black metal and post-metal. The overall tone is very melancholy and the thumping bass drum might signify something ominously portentous. Bass guitar is surprisingly clear beneath the dense guitar-work (there are two layers of continuous guitar) and the drumming, but this can be explained by the generally clear production and clean sound. The only qualm a listener might have is that the vocal is very hard to hear and comes across as very strained, as if it was being crushed between two slabs of granite and the unlucky sandwich fill is crumbling away. While the main melody is quite pleasant, it’s not very remarkable and the song is repetitive. “Imperium” is a slow, sorrowful song, lumbering for the most part, and the main things that redeem it are the bass guitar melody that sometimes wants to run away and the occasional guitar sparkle. As with “Abisso”, repetition dominates: the idea behind this is to create a hypnotic and trance-like state in which listeners become lost and at one with the music and its message of longing. The problem though is that the songs here (with the exception of the Enslaved cover) are not long enough to allow full immersion and not all of them progress towards a resolution but tend to stay much the same throughout.

“Suicidio” is an emotionally moving piece with bass guitar runs up and down the scale and a rich, almost jangly guitar sound. Brass accompaniment add emotional depth to the music and for several minutes I almost believe that the song might be working towards a climax and something that relieves the tension and sense of unease and dread. The energy of the song instead passes onto “Rovina”, a more hopeful and optimistic piece.

The best track turns out to be the Enslaved cover “793” which unfortunately shows up Janvs’ shortcomings in the song-writing and music composition department. This is the longest song, the most energetic and intense as well, and also the most self-contained and easily identifiable, with a definite focus and direction.

All the technical mastery and arrangements, lavish as they are, can’t mask the fact that Janvs’ original songs are not that great and that the band needs to take a leaf out of Enslaved’s book on how to write really great songs which need no complex post-metal / art rock padding to improve them.