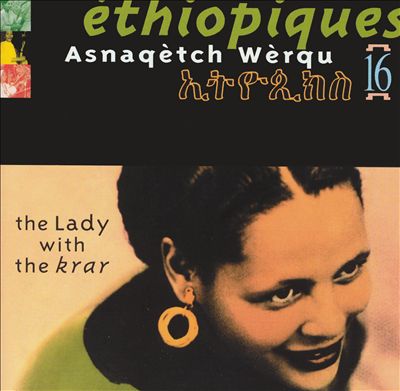 On the cover of this album and in the photos inside the CD booklet, the musician / singer Asnaqetch Werqu , focus of this 2004 Ethiopiques volume, either looks cheerful, relaxed or calm – but the 22 songs featured here which she sings, accompanying herself on her lyre-like instrument, are filled with loneliness, desire, jealousy, thoughts of revenge and the pain and torment of unfulfilled or absent love. All the more remarkable then that when you hear Werqu sing and perform, her voice is for the most part amazingly restrained and matter-of-fact, and her playing is equally sober and stenographer-like. (What’s even more remarkable is that a lot of the singing and playing is improvised.) Playing the krar by plucking the strings individually, Werqu lets the notes spill out in a pointillist manner which allows her voice to dominate without over-dramatising the emotion and tensions in the lyrics. This is more or less the album in a nutshell.

If you are not familiar with the Buda Musique series of Ethiopian popular and folk music, you’re better off sampling the earlier volumes and in particular the compilations to acquaint yourself with the distinctive rhythms and melodies, and appreciate the genres and influences both local and foreign that inform the performers’ music and styles. Spending nearly 80 minutes with Werqu and her krar is a very daunting prospect: from start to finish, Werqu belts out the songs with a mournful urgency that suggests the emotions behind them are too strong to hold back and if the sad stories behind them are not heard, Werqu’s heart will break. The krar, when played staccato-style the way Werqu plays it, displays tones that seem almost hammered in style, as if it were a mini-piano crossed with a banjo. The tones have a certain slight melancholy and is very much a medium for transmitting the emotion in Werqu’s lyrics. Resignation and acceptance of one’s fate, especially if one is a woman in a society dominated by communal traditions and patriarchal values (and Werqu seems to have been a rebel at heart as well), are a strong sub-text.

Part of the reason for Werqu’s inclusion in this Buda Musique series is to highlight a particular music tradition of wandering singers and performers called “azmari”. The tradition was usually handed down the generations within families. Werqu herself did not come from a family of azmari perfomers but became a travelling singer and musician of sorts by accident; starting out originally as a stage actress and dancer in the 1950s – at one point in her acting career, she was compared to the then glamorous US actress Elizabeth Taylor for her immaculate dress and appearance – she was later invited to sing and play the krar at private parties, and her musical career started out from there, eventually eclipsing her acting career (she retired from acting some time in the 1980s). Improvising lyrics was part and parcel of performing as an azmari and individual singers often achieved renown for their wit, poetry, the vividness or other unique qualities of their lyrics, and most likely a lot more which, depending on the political climate in Ethiopia from the 1950s onwards, could risk jail-time for some singers.

According to the CD sleeve notes, Werqu was in the unenviable position of being the last significant azmari singer and improviser to continue this tradition; the turmoil of repressive military rule over the late 1970s and the entire 1980s, drought and famine leading to food shortages and starvation, and civil war have led to huge numbers of people leaving Ethiopia and many of the country’s cultures, traditions and histories forgotten or destroyed. The material situation may be better now but urbanisation, current poverty and greater contact with the outside world bring their own challenges to the survival of Ethiopia’s musical traditions. Values associated with capitalism, with the consequent commercialisation of music and the gradual absorption of Ethiopian music artists into the global music industry, may have the unintended effect of wiping out traditions and genres, and the values and particular voices like Werqu’s here associated with them may end up lost.

Werqu herself died in September 2011, after a long illness. A documentary about her, “Asni: Courage, Passion & Glamor in Ethiopia,” made by young Ethiopian director Rachel Samuel, was released in 2013.