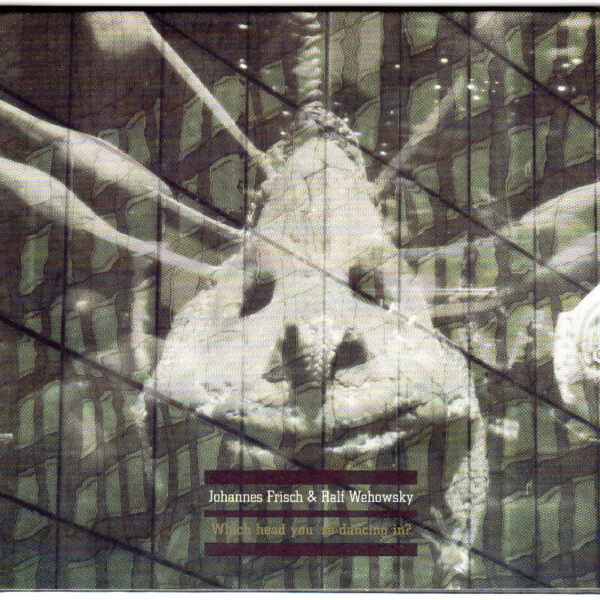 Which Head you’re Dancing in? (MONOTYPE RECORDS MONO082) is the enigmatic title given to latest collaboration between Johannes Frisch (bass player, one of the main men in Kammerflimmer Kollektief) and Ralf Wehowsky, the German maverick experimenter and rugged electro-acoustic grand master. They’ve met up before on Tranende Wurger (Korm Plastics, 2005) and Unwahrscheinlichkeiten (Waystyx, 2010), but this time the conceptual “theme” of the record is dedicated to the music of Ornette Coleman. Even the track titles make references to his compositions or album titles, such as ‘Crisis in Space’, and sometimes doing it in a darkly detourned fashion, such as ‘Skies Of Guantanamo’ – the latter a clear reference to Skies Of America, Ornette’s 1972 orchestral suite, but these cynical Europeans perceive those skies which once shone with hope and opportunity are now permanently darkened by covert political operations and anti-terrorist measures taken too far.

The colour scheme of the cover – sickly green and pessimistic greys and blacks, decorated with images of grotesque puppet heads – further confirms the caste of this album, which is somewhat gloomy and angst-ridden, veering between abstract passages of uncertain moody contemplation, and restless beat-heavy electronica episodes which are like a sarcastic parody of techno or jungle or other forms of dance music, spitting out twisted noise spurts among wild computer-drum patterns. Wehowsky plays all the instruments apart from the bass, and he also does his “sound transformations”, throwing a lot of instruments and samples into this sprawling, angry melange, quite often overwhelming the ears with the generosity of his layers and bricolage. And then the next track will be minimal and perplexing, still ugly and strange, but grunting out inexplicable and solitary noises like an unhappy pig in a factory farm.

Frisch responds manfully to the impossible task of attempting to “accompany” Ralf as he freaks out on these crazy flights, weaving his bass plucks and bowing his strings into whatever gaps might be suitable, and driving the faster and more agitated tracks along with his manic free jazz energy. What often results is like a darkened, 21st-century parody of free jazz updated with more recent forms of music, depicting an unhappy world where all the 1960s dreams of civil rights, justice, and freedom are being buried under a welter of political incompetence, paranoia, and rampant misuse of computer technology against its own citizens. It’s disturbing to imagine that Ornette’s uplifting music could have been the inspiration for such bleak pessimism, but I suspect that’s entirely the point; if this is a “message” record, it’s a message which ought to give the President of the United States something to choke about over his morning muffins. Even the title indicates the general “wrongness” of things: the simple clarity of Ornette’s “Dancing In Your Head” is recast as the awkward, ambiguous and not-entirely-grammatical utterance “Which Head you’re Dancing in?”. Not a happy listen, then, nor a particularly comfortable musical/aural experience, but a very strong and timely statement. Released in September 2014.