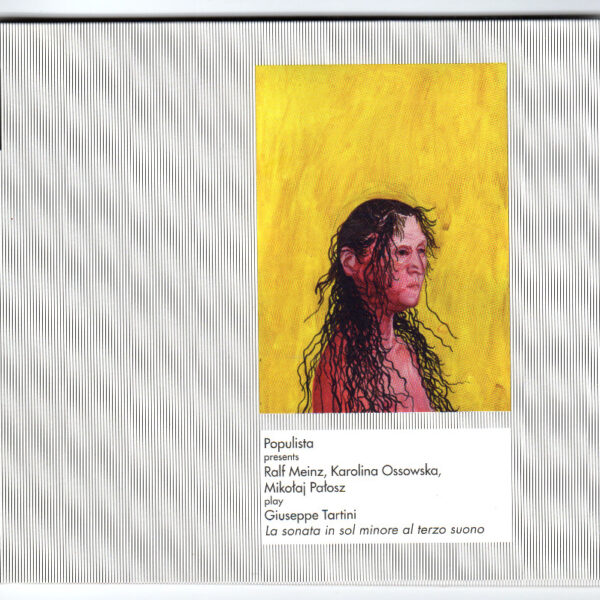 From 12 March 2015, received the three latest instalments in the Polish Populista series, records curated by the notable post-modernist conceptual polymath Micha? Libera. We’ve been enjoying these imaginative and unorthodox reinterpretations of classical and avant-garde music for some time now, ever since receiving the first three in October 2011. Numbers 10 to 12 in the series are linked by the notion of “breaking rules”, of departing from a composer’s instructions, or in some cases interpreting these instructions almost to the point of stretching them out of all recognition. Can’t wait to hear the Alvin Lucier one, then. But today I’m playing POP10 in the series, where the focal point is the 18th-century composer Giuseppe Tartini; the full title is Populista Presents Ralf Meinz, Karolina Ossowska, Miko?aj Pa?osz play Giuseppe Tartini, La sonata in sol minore al terzo suono (BOLT RECORDS BR POP10).

If you’ve followed any of the Populista series, you’ll know not to expect a straightforward or respectful rendition of composed music from the avant-classical canon, and indeed as soon as you start playing POP10 you’ll be greeted with a perplexingly modernist album of long-form string drones played by Karolina Ossowska’s violin and Miko?aj Pa?osz’s cello; Meinz did the sound design, a contribution important enough to have his credit printed above those of the musicians, and the music was recorded in the Dunikowski Museum of Sculpture in Warsaw. To bring home the impact of these very “present” recordings, may I point out that there’s an extra technical credit for Edyta Jarz?b, who contributed “additional room tone recordings”. Hi-fi buffs used to boast about sensations such as “having the cellist right next to you in the room”, but on this record the sound is so palpable, it’s practically wriggling under your carapace.

On that level it’s beautiful to listen to; the concept behind the record is a thorough explanation of difference tones, or combination tones, a “third” tone that mysteriously appears on some occasions in performed music when in fact there are only two sounds being created. I’d imagine it’s something that’s not unknown to those who play the violin. This aural phenomenon is well-understood today; at any rate moreso than it was in 1754, when Giuseppe Tartini first observed it happening. He was a violinist himself, and a music tutor, and may have been the first musician to perceive difference tones and to document his findings. I have no idea how true this is, and Micha? Libera is, in his writings, often eager to make these daring historical connections that no-one else has apparently noticed, but if he is right then the observation does have extra resonance in the context of 20th century composition, particularly the New York school; I may not be much of a musicologist, but even I can recognise how important these “phantom notes” might be to the music of Steve Reich, Tony Conrad and La Monte Young.

Which brings us to the last piece in this little jigsaw puzzle. POP10 has been composed / created / arranged by having the musicians play only a small number of bars of Tartini’s La sonata in sol minore; for instance, the first track extends bars 1-3 for over eight minutes. This slow-motion playback strategy is, I assume, what has led us to this long-form and highly astringent droning string music. Astute readers will recognise the structural similarity to another well-known and historical achievement in 20th-century experimental composition. Libera knows all this, but in his press notes he playfully avoids mentioning the name of the composer, for reasons which I think we can all understand. Indeed, he seems to relish the opportunity to place another chip on his shoulder. It’s this somewhat cheeky and defiant streak that adds an additional frisson to the term “Populista”; as if Libera were trying to form a band of political rebels and activists, devoted to undermining the “establishment” figures in the avant-garde canon.