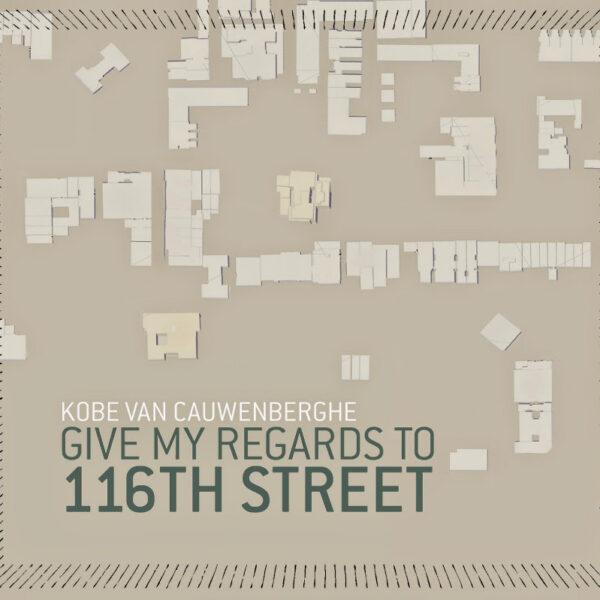 Kobe Van Cauwenberghe is a Belgian guitarist with a growing reputation in modern experimental music circles and an interesting CV of electric and acoustic guitar activities, both solo and in ensemble settings. This album is an homage to the composers he encountered whilst studying at the music department of Columbia University in New York City, located at the titular 116th Street.

What we have here, then, are six pieces for solo acoustic guitar, “often with (extreme) amplification”, as it says in the sleeve notes. I’m guessing that this refers to the amplification of extremely quiet sounds, since Van Cauwenberghe shows a marked determination to bring out all the weird little noises that normally lurk way, way down in the mix. Although there’s a fair bit of racket in there too.

The sleeve notes go on to say that “in this program the instrument is, as it were, surgically dissected”, which is a bit of an understatement. The album doesn’t sound like a guitar recital so much as a forceful and rather intrusive investigation, carried out by someone who’s never seen a guitar before and who probably isn’t even human. Perhaps someone like the demon Asmoday, who appeared to the writer Alan Moore as a shimmering lattice made up of multiple images of spiders, taking turns at the strings with an enraged Australopithecine.

This ambience of arachnid delicacy and ape-creature savagery is there from the very first track, “Strata”, which layers spidery harmonics over some brutal bass string plucking. It sounds as if the guitarist is trying to physically pull the strings off the fretboard, before the whole thing dissolves into some frankly sinister rubbing sounds, of the sort you wouldn’t want to hear behind you in a crowded railway carriage. Elsewhere, you get haunted house echoes, the blurred ghosts of folk melodies, unknown machinery doing violence to the strings, even some unevolved jazz chords, in a strange blend of the violently primitive and the intangibly supernatural.

Of course, the music on this album isn’t being played by an early hominid or an extradimensional entity. It’s being played by a young man from Antwerp, and all of these pieces were written by contemporary composers. The fact that someone actually sat down to write this stuff is not the least surprising thing about the album, since to my untutored ears, it all sounds like pure improvisation.

It takes a certain kind of musician to approach their chosen instrument with the express intention of making it sound so utterly unlike itself. And, indeed, it takes a certain kind of listener to sit through the recorded results. If your favourite John Fahey album is Sea Changes and Coelacanths, then this should be right up your 116th street. If it’s Death Chants, Breakdowns and Military Waltzes, maybe less so. Whatever the case, this is an album which entirely succeeds on its own terms. Van Cauwenberghe is clearly a generous and creative spirit, and many fascinating sounds await within.