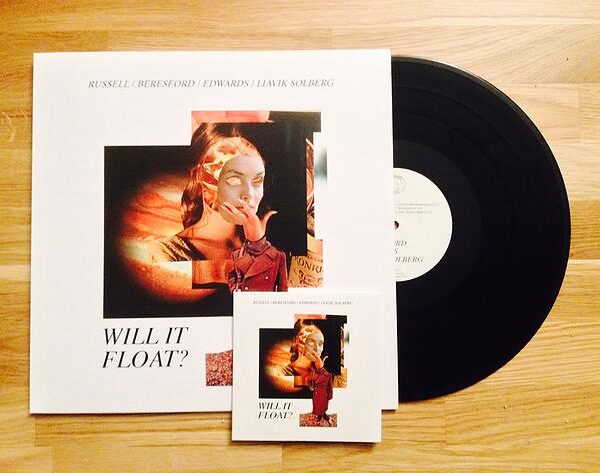 “Aquarius, Libra, Leo, Cancer, Ralph, Charles, Paul, Larry, float, float on.” Ah yes, I’m sure many Sound Projector readers will remember ‘Float On’ by the unfortunately named Floaters. If so, you’ll be pleased to know that Will It Float? is about as far removed from it as it’s possible to get whilst still remaining in the realm of music.

Instead of Ralph and his chums, this is John, Steve, John and Ståle – I don’t know their star signs, I’m afraid, or whether any of them share Ralph’s enthusiasm for “a woman who loves her freedom”. I do know that this is a heavyweight summit of British and Norwegian improvisers, so it’s safe to assume that they all “love their freedom”. There’s certainly plenty of it on display here, in a musical sense.

Four tracks of top-notch improv for your consideration, then, recorded live in concert at St Mary’s Old Church in Stoke Newington. Hats off to recording engineer Dave Hunt and to Fred Lonberg-Holm, who mixed and mastered the album, for capturing these multifarious sounds in such depth and clarity. As a recording, it’s a considerable achievement. Fred Lonberg-Holm, you may recall, is the jazz cellist who also collaborated with Ståle Liavik Solberg on the album Just Outside The Door, reviewed in this very column a few months ago.

Here, the musicians are Liavik Solberg on drums and percussion, John Russell on guitar, John Edwards on double bass and Steve Beresford on objects and electronics. Am I only the person who wishes that sleeve notes would be more specific about these things? What “objects”? Old treacle tins? Whale skulls? A Crown Derby tea service? I need to know what’s making these sounds!

In any event, these things combine in pulsating, swirling, elastic blobs of sound, everything shifting and changing direction in an instant, like a shoal of fish menaced by a shark. Beresford’s electronics produce all manner of sci-fi spookiness, adding a unique element to the mix. As in all the best improvised music, nothing dominates at the expense of anything else, and there is a palpable sense of the musicians listening and responding to each other in the moment.

Good collage art on the sleeve as well, courtesy of Kjetil Tangen, so it’s a satisfying package all round.

Will it float, then? Yes, I rather think it will.