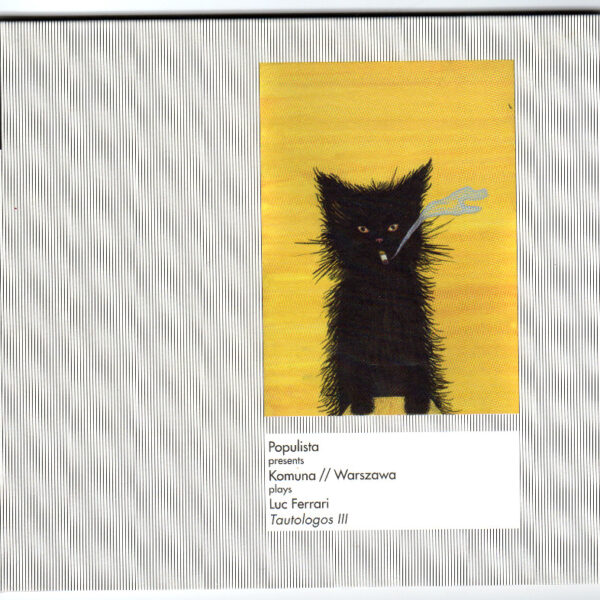 Here’s another release in the Bô?t Records label Populista series, called Populista Presents Komuna // Warszawa Plays Luc Ferrari Tautologos III (POP011). As noted in earlier post, Numbers 10 to 12 in this series of releases explore the notion of “breaking rules”, of departing from a composer’s instructions in the interest of taking radical, modernist compositions to arrive hopefully at results that are yet more radical, more challenging. In this case, the small group of string players, organ players and vocalists have succeeded in creating a piece of daring and wild music that verges on the alarming, and as far as I can tell in my superficial manner bears little resemblance to any Luc Ferrari recording I’ve heard. Very coincidentally, we’ve recently heard a recording of ‘Tautologos III’ performed by GOL and Brunhild Meyer-Ferrari, and their approach was to realise a chaotic melange of near-random instrumental sounds pasted together by voice fragments, where the splicing of the tapes produced exciting collisions of timbre and pitch. Conversely, Komuna // Warszawa have opted to foreground the string sections playing curious fragments of 20th century string music, many of which appear to have been chosen by the violinists or cellists from their repertoire, and include the works of other composers. These are “collaged” into the general sound-melee which is underpinned by an unending, wheezy organ drone; it might be this element that’s creating the atmosphere of unease and menace. The voice aspects which I think are so important to Ferrari are represented in one instance by a distorted and urgent reading of a text which appears to be coming into the studio by way of an old-fashioned dial telephone; it’s almost like a segment from a 1960s Godard movie in its didactic and unceasing tones.

Throughout, we also have Micha? Libera’s running commentary, and this is such a distraction that it may be the deal-breaker for some potential listeners. He’s constantly clueing you in to the selections of music that have been made, and even to some extent explaining why they have been selected. He’s also providing a meta-commentary on the score, reminding us that “anyone can play it”, to emphasise the democratic and inclusive nature of his agenda when it comes to being a champion of modern music. Unless he’s just trying to subvert the entire structure of modernism, from composers to critics, shaking the tree to see what nuts fall out of it. His commentary also keeps reminding you that you’re listening to a recording of a composition, with the interpolation “This is a performance of Tautologos III’ frequently appearing to disrupt your normal listening pleasure. If he’d applied for a job as a Radio 3 announcer using this as his CV, they’d probably show him the door at Broadcasting House quicker than you can say Shostakovitch. I assume it’s again part of his agenda with deconstructing modernism; like Godard by way of Brecht, he does take some delight in pointing out the joins in the scenery and calling attention to the proscenium arch.

Libera probably feel licensed to do it this way because the printed instruction for ‘Tautologos III’ explicitly states that “nothing is imposed by the composer, who leaves it open for the performer to choose an action followed by silence which makes the actions separate”. Libera is not only taking this instruction literally, but he tells you that he’s done so, ad nauseam. As for the silences – and the general restraint and subtlety I usually associate with Ferrari – all of this has been ditched in favour of a constant, layered jumble of organised sounds and streams of musical / verbal information, leaving little room for the listener to manoeuvre. The only thing that remains constant with this and other recordings of the piece is one original tape voice part by Ferrari, what I call the “shouting man” effect, and when it appears here in amongst all the post-modern detritus, it’s almost as familiar as a hook from a pop song.

Whether Luc Ferrari himself would approve of this particular interpretation I have no idea, but it’s certainly far less respectful than the GOL and Brunhild Meyer-Ferrari version mentioned above. Libera once again proposes modern music as a source of ideas and concepts which he can raid freely to fuel his own notions, and he wants to push the envelope of freedom about as far as he can. His methods, probably seen as wildly unorthodox by many, may serve as blueprints for further interpretations and approaches to the thorny landscape of modernism’s history.