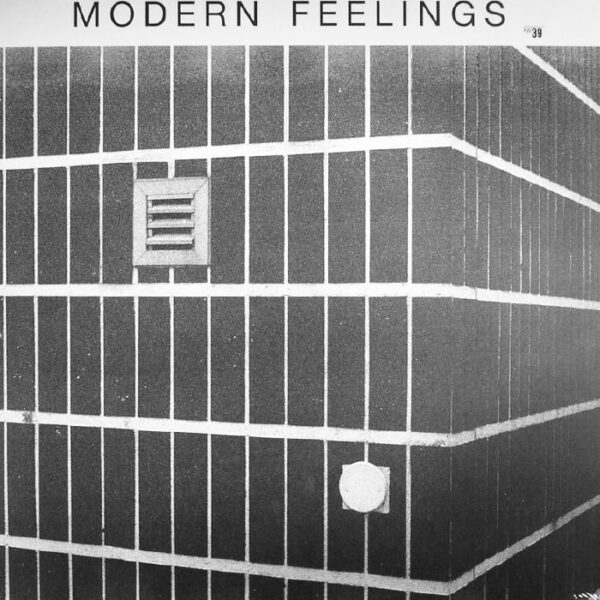 Modern Feelings (SÄHKÖ RECORDINGS PUU39) lets us know where we’re at from the get-go with its foreboding cover, a monochrome photograph of a grim brick structure, most likely some example of 1960s Brutalist architecture, designed expressly to demoralise, depress, and ultimately destroy the populace for which it was constructed. Note how the photo is cropped so that the sky is not visible, and the receding perspective doesn’t actually lead anywhere or allow the viewer to escape. Note further how the white lines of cement quickly assume the proportions of the bars of a cage. If there are any “feelings” in this modern world, they will be suppressed, denied, thwarted…not an optimistic prospect so far.

The record itself is a primo slab of Helsinki underground rock-noise with derailed jazz aspirations, performed by an A-1 combo of angsty players led by the great Anton Nikkilä. You need only see my recent raves about Astma or his other collaborations with Alexei Borisov to understand my attraction to his discordant and abrasive guitar stabs, so it’s very welcome to hear him in a different context. The quartet also includes Pekka Airaksinen on piano, Ari Salonen on bass, and Samuli Tanner on drums; plus there’s electronic bursts a-plenty from Nikkilä and from the drummer, both spitting their jolts of sizzling anarchy into the boxing ring. So far if you wanted an advance on post-punk instrumental rock that would have been unthinkable in 1978, Modern Feelings deliver an astonishingly energetic, complex, and intellectually satisfying proposal.

The word “agitated” best sums up the mood of this restless, moody record of dissatisfaction; all four players have pins and needles running up and down their entire nervous systems, acerbated with 18 cups of black coffee, and nowhere to unleash this blind force (see front cover observations above) except through attacking their instruments. But it’s a managed, controlled, release of energy; each painful clash and anti-harmonic of sound evidently planned, structured. At times they are so successful at doing this that the listener experiences three or four colliding lines of music all pulling against each other. Yet that process is clearly audible; it’s not a free-for-all, nor a melange of indistinguished noise. That takes some skill, a high degree of poise, I’ll wager my last markka.

I’m both astonished and encouraged to find that Pekka Airaksinen was involved in The Sperm, described here as a “confrontational avant-garde collective” whose 1970 LP Shh! Heinäsirkat is pretty damn essential, but hard to find. He’s been incredibly active since, for instance releasing his bizarre series of LPs dedicated to the thousand Buddhas, released on the Dharmakustannus label.

Excellent four-track LP with even more grim photos of urban desolation included in my press release (or see advert, below). Arrived 7th November 2014.