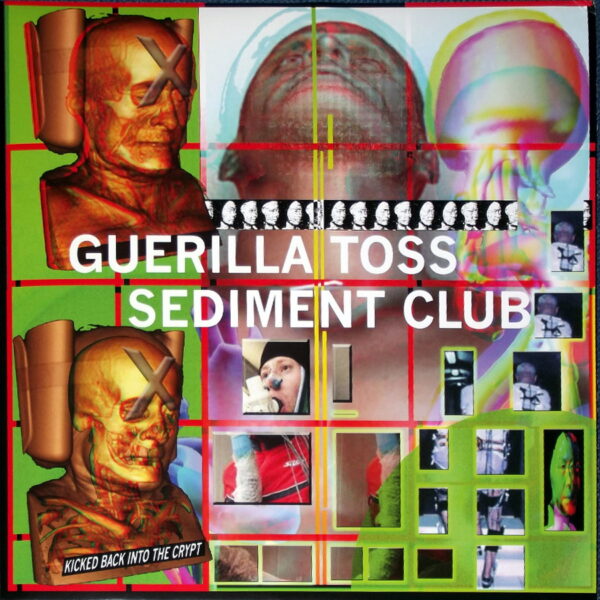 Kicked Back Into The Crypt (FEEDING TUBE RECORDS FTR131 / SOPHOMORE LOUNGE SL054) is a split LP by Guerilla Toss and Sediment Club, two instances of weird far-out American bands who both seem determined to up the ante on the musical underground of the last 40 years, starting from punk and post-punk, and have set their sights on being crazier and wilder than any given antecedent you care to name as you rummage lovingly through your boxes of rare seven-inches. The LP is a joint release with Sophomore Records and to my chagrin we’ve had it hanging fire in the LP waiting line since 2013. With a cover like this, you’d think I’d have gotten to it sooner.

We noted Guerilla Toss, a five-piece from Boston, some time ago with their fine album Jeffrey Johnson. I was struck then by Kassie Carlson’s singing and by Ian Kovac JR’s amazing synth work, and today I see no reason whatsoever to revise nor rescind my earlier estimation. In fine, they play a crazy screechy punkified din which is highly enriched by the unhinged, squiggly electronics; Carlson is the sort of near-confrontational singer who won’t let you off the hook, and if you listen long enough you’ll find yourself owning up to crimes you never even committed. On their side of the split, all the songs segue into an unstoppable, delirious mess of high-energy, as good as a live set in a seedy cellar.

Besides the sensations of manic joy they generate, Guerilla Toss leave an impression of incoherence, babbling-in-tongues. Not so for Sediment Club, a New York combo whose work is represented on the B side. Somewhat darker in tone and more frowny than their Boston compadres, the New Yorkers have a (male) lead singer who is clearly trying to tell us something, and while I haven’t transcribed his entire lyrical output here to analyse the content in any depth, I’ve got an immediate impression of a ranter, a preacher, someone trying to teach us a lesson about something. The sustained argument of his declaimed songs is ably supported – up to a point – by some heavy-handed but aggressive punk noise, where again the synth plays a useful role and supplied some heavily alienating swooshy wind effects that chill the brain and bring goosebumps to the flesh. The drumming is pretty basic though, and the ineptitude of the rhythm section tends to expose some of the deficiencies of these songs, which feel a little under-finished. Even so the overall tone of menace which Sediment Club generate is a strong point in their favour. They’re a little like the Flipper to the X-Ray Spex of Guerilla Toss.