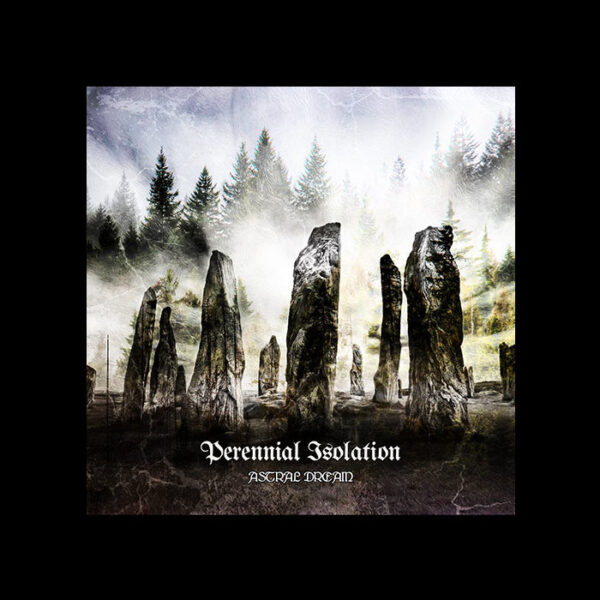 Perennial Isolation is a Catalan ambient BM band based in Barcelona. The band’s music is a powerful and hard-hitting style of fusion atmospheric BM / melodic post-metal with a very steely sound and thunderous drumming. It’s very good strong and muscular music to thrill to but the vocals can get lost in such loud and booming music. The singing can sound very feeble and reedy rather than angry or anguished and the musicians should consider bringing them more upfront. Most songs have very strong melodies complemented by continuously or almost continuously thrumming blast-beat percussion.

Early songs are fairly straightforward attacking black metal verging on thrash and death metal. They can be very formidable and monstrous like solid blocks of continually buzzing guitars pushed onwards by booming drumwork. The first three songs feature BM-styled vocals but a change comes about in the fourth track (“Cold Inside”) with spoken clean-toned vocals sharing equal time with the usual sandpapered singing, and this is echoed in the guitar-work with a blues-blessed electric guitar duelling with the battery of BM tremolo noise. The first half of the album concludes with a brief instrumental interlude of solo flamenco guitar backed by a field recording of rain.

The album continues with strong thunderous music that features a great deal of virtuoso drumming, more blast-beat rhythms and less singing than before. There are plenty of explosive instrumental breaks where both guitars and drums go hell for leather into the wild blue yonder, racing each other as if the end of the world is upon us and there’s so much vast ground to cover before everything shuts down. At this point I have to admit I’ve lost track of individual songs so I’m just letting myself be swept along by the sheer energy, passion and intensity of the music. While there are occasions where a dark urban-blues side is revealed with flowing liquid melodies, these moments are brief and end up not so much swept out of the way as steam-rolled out of existence. Subtlety isn’t a very strong point here and the band might want to consider toning down the power on future recordings so that listeners don’t end up feeling more bludgeoned than immersed in the music.

Overall this is a solid effort technically with consistent playing and a lot of power and aggression produced. The main danger for Perennial Isolation is that there is so much thunder and power here that the music escapes the band members’ control and ends up flattening everything in its path. When they try to be slower, quieter and introspective, the music is still heavy and comes across as a bit clumsy. If these guys intend going in a more emotionally and musically complex direction with an equal emphasis on sorrowful and melodic post-rock and hard-n-heavy BM – and I think that’s what they’re aiming for – they’ll need a lighter touch, a sense of fragility, along with the power and the thunder.