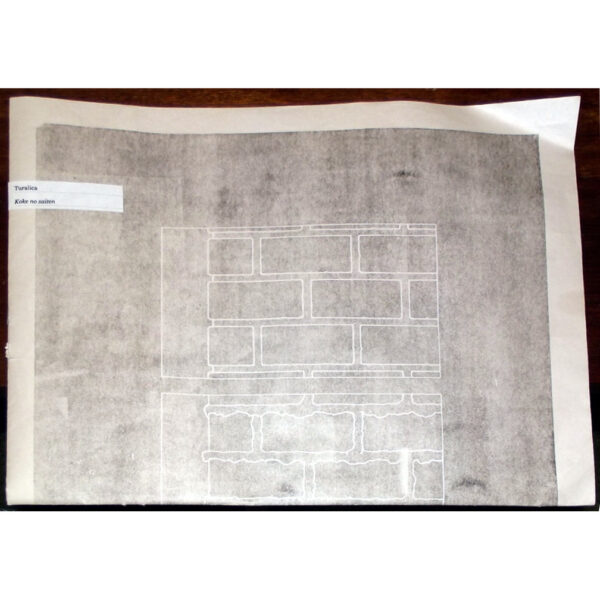 Eric Kinny sent a nice parcel from Nambsheim in France. He seems to be acquainted with Ogrob in some way. He also has a micro-label called Santé Loisirs, and here we have two cassette releases.

Turalica’s Koke no saiten (SL02) is packaged in an oversize art-booklet, or pamphlet, with images by Kinny printed on newsprint. The front cover of this art-newspaper has a puzzling motif, suggesting in a surreal manner that we might discover unusual micro-organisms lurking in the mortar of a brick wall. In fact, it seems to refer specifically to fresh cement providing a natural hive to these peculiar protozoa. Inside, the images are fuzzy and degraded pictures of algae or lichen perhaps, in extreme closeup and hard to recognise. The tape is in the back, with another piece of paper pasted on to create a makeshift envelope.

Turalica are a trio of Japanese musicians playing a species of gentle, low-key, insistent pop songs, performed with the elegance and restraint that only the Japanese can manage. I’m certain the throwaway nature of their music, and the apparent haste with which they play it, conceals tremendous skill; clever jazz chords and unusual time signatures are likely to be buried in the folds of this particular sheepskin. Recorded in 2012, this album was originally released on the Iscollagecollective label in Japan; this limited (200 copy) cassette is a reissue, and a joint release with ÖDL Documents. I’m charmed.

Likewise am I enchanted by Eric Kinny’s own record, a short cassette single called Oui (SL01). For the cover, he turned an old LP cover inside out and printed a nice wood-block image on both sides, one side showing a cactus, the other perhaps a leafy object of some description, continuing his preoccupation with plant life. In working this way, he’s made a virtue of the torn paper surfaces that resulted when he split the LP cover open; they soak up the ink in a delightful manner, and ragged edges result. It’s a lovely tactile object.

Music: also in the pop genre, but no vocals. Instrument may be a Casio or similar keyboard; it’s got that cheap but warm tone, hints of distortion. There’s a drum machine too. Simple melodies; brevity. Yet somehow goes beyond pop in the way that Ptôse and The Residents often tried to do, to arrive at a strange and more personal place. Kinny seems to be saying more in ten minutes than many contemporary artists manage in a triple-CD set.

I see the label is up to #3 now, with a tape by Les dauphins et la science. Be sure to visit the site for more unusual art prints for sale.