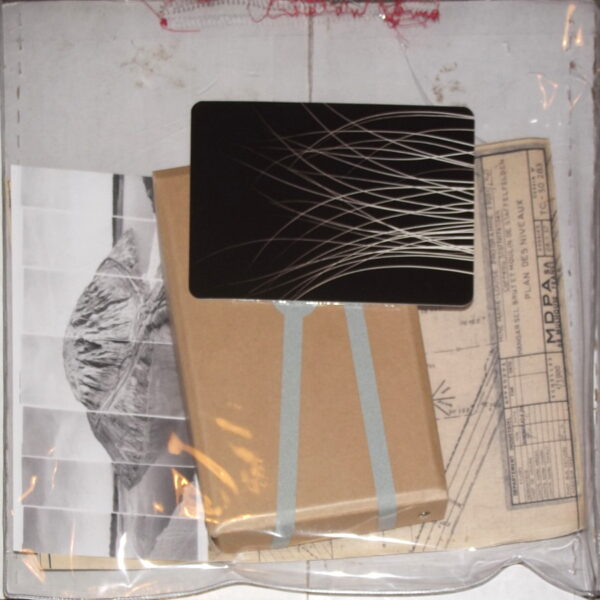 From 20th November 2014, we have the first release (iiss01) on Sebastien Borgo’s tiny art label Editions Vibrisse. A cassette tape delivered in an elaborate package. First there’s a transparent vinyl sleeve which you might use to house an LP, sewn up at the top with red thread. Inside it is a blueprint, an insert, and a cardboard box containing the tape. The box contains yet more inserts, four art postcards and some slips of paper which describe this release. Musicians featured – Ogrob and Alan Courtis. Linking theme – salt mines or potash mines. Shared method – field recordings. The cassette has a shiny red surface, inducing fear for some reason…it resembles the carapace of an evil beetle. Perhaps two dozen evil red beetles were slaughtered and skinned for their hides, to produce the edition. That’s a cruel act, even in the name of art. Good thing it never happened.

Side A, if indeed it is as sides are unmarked, is called ‘D’Hella Dera’. Ogrob recorded sounds in the Staffelfelden mine shaft in the French countryside. He went to a depth of 150 metres, if that means anything to you. Presumably only at this level could he reap the rich harvest of distressing sounds. It’s a bleak and inhuman portrait he serves up…like a non-musical, attenuated version of metallic industrial music. Echoing, confined, chambers. This makes more sense if you realise that ‘D’Hella Dera’ is the nickname given to this mine, and it means ‘Hell’s Gates’. It refers to an infernal, hot hell…labouring miners sweated under temperatures of over 50 degrees in there. Grim. I should point out Seb didn’t make the trip in person. He just lowered his microphone down into the shaft on a piece of string. I wouldn’t want to enter the Gates of Hell either.

On the B side, Alan Courtis reprocesses these unsettling recordings, to produce a low-key electro-acoustic murmuring drone which he titles ‘Le Sel Binaire’. Part of the process included a handful of salt. Or perhaps an entire sack of that gritty mineral. The point is that it was harvested by hand. Maybe he rubbed salt into the surface of the tape. Or exploited its sonic properties in some way. You’d probably have to agitate it to some degree to produce sound. And close-mic it too. But the point is taken. He’s rubbing salt into our wounds. Aie!

Just the other day (in May 2014) I remarked “What is it about modern artists and urban desolation? They can’t get enough of that abject despair and industrial ruin.” I said it in the context of Entrailles, a video and sound-art collaboration featuring Franck Vigroux, which also very coincidentally was set in a mineshaft. Also abandoned. I think the abandonment is probably the appealing feature to the dark minds of such as Vigroux and Ogrob, and they take a perverse delight in reminding us that these desolate sites used to be highly active industrial zones. But that’s all history now and all that’s left is a deserted, empty, thing. In the case of ‘D’Hella Dera’, perhaps it’s a metaphor…Ogrob may feel himself that he’s toiling away in a salt mine, with great physical discomfort to himself, for little pay. Such is the fate of the avant-garde sound artist today. The release is illustrated with the afore-mentioned blueprint of the mineshaft, and monochrome photographs of same. This is rather common practice in the context of site-specific works today – just ask CM Von Hausswolff, for instance – but at one time it used to be quite challenging, for instance the deathly dull photographs and maps of 1970s conceptual artist Richard Long, used by him to illustrate his planned walks, which he exhibited as some form of artistic statement.