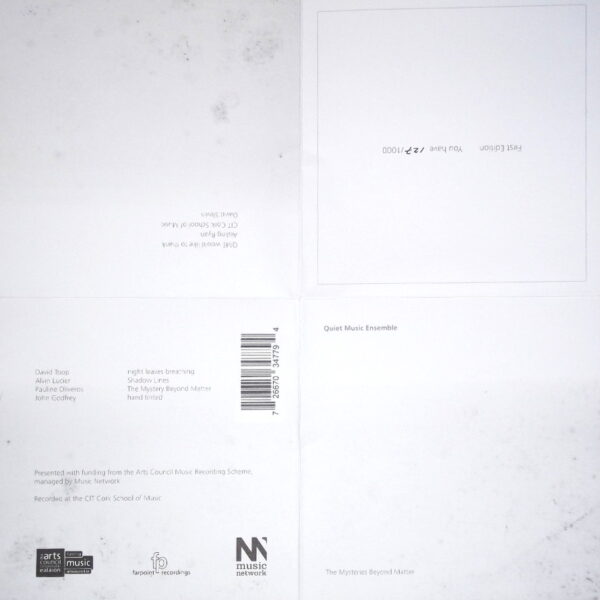 We don’t hear from the Dublin label Farpoint Recordings often enough. They are home to some unusual and choice items of sound art, including for instance the sound artist Fergus Kelly who does the field recording/minimal electronic thing to great acclaim, and the site-specific White Star Line EP from Danny McCarthy. Today we have the Quiet Music Ensemble, a five-piece of musicians who perform restrained chamber music with stringed instruments, woodwind, brass and electric guitar, and on The Mysteries Beyond Matter (fp052) they turn their stumps towards interpreting contemporary minimal scores. Alvin Lucier’s ‘Shadow Lines’ is meat and drink to them; it might have been scored with them in mind, as it calls for pretty much the exact instruments in their set-up. What we hear is 15 minutes of glacial, haunted microtonal coldness, proceeding across the empty pavement with the assurance of a shadow cast by the winter sun.

Then there’s their take on Pauline Oliveros, a 24-minute composition called ‘The Mystery Beyond Matter’; Quiet Music Ensemble played the première of this work in 2014, and it involved a computer program providing artificial resonant spaces. It’s all about acoustical spaces; the Ensemble don’t so much create sound as explore an environment, much like phantoms floating around a deserted shopping mall after the end of the world. Does it make sense to say there’s a palpable silence underpinning this music? It’s what’s not being played that’s somehow relevant, and we even go beyond the old Cagean idea of hearing random creaks and groans in the performance space. Again, a rather ghastly chill adheres to your skin from hearing this piece of beautiful, but very stern, desolation.

John Godfrey, guitarist to the group, also wrote ‘Hand Tinted’, another eerie and barely-present all-white drone which is enriched – although that’s too strong a word under the circumstances – with field recordings of birdsong, insect noise, and purring motorcycle engines passing by. We’d almost be in Francisco López territory where it not for the abiding sense of emptiness and loneliness; a sound world teeming with life, or at least betraying some signs of it, yet still passing on an apocalyptic sense of imminent doom. It’s always impressive to me how musicians can perform with such restraint, eking the sounds out as if they were spider’s webs.

Also here: ‘Night Leaves Breathing’ by David Toop, a composition that reflects his then-interest in near-inaudible sounds, mostly in his own house; he noticed the wealth of sounds that a house can bring when it’s “calm”, presumably after everyone has gone to bed and the very timber beams start to relax themselves. This one opens the CD. For some reason I imagine it posed the biggest challenge for the Ensemble to realise it at all. Partly because I think it was originally a (quite short) tape composition, and they’ve now inflated it to 20 minutes; partly because of the strange and perplexing silences layered into the body of the work. It’s probably the least “eventful” piece on the whole album. But there’s an undercurrent of something which might be a man snoring, and that’s referenced in the original tape piece too. Quiet Music Ensemble should consider doing this piece in the context of a Finnegans Wake festival in Dublin, unless they already have. Hope these random observations are helping to some degree.

A very strong album if you enjoy quiet music; the connoisseurs among you will appreciate the important differences between a record of compositions like this, and music made by improvisers from the schools of Reduced Playing or Onkyo. Only the cover art disappoints slightly. It’s a white field (like a white canvas from the severe 1970s school or art) with smudges in the corners, like a linen sheet left outside to get spotted with mould. They should have recruited Ben Owen from winds measure recordings to do one of his embossed sleeves. Otherwise, full marks to all concerned for a coherent statement of austere wiriness. From 13 April 2015.