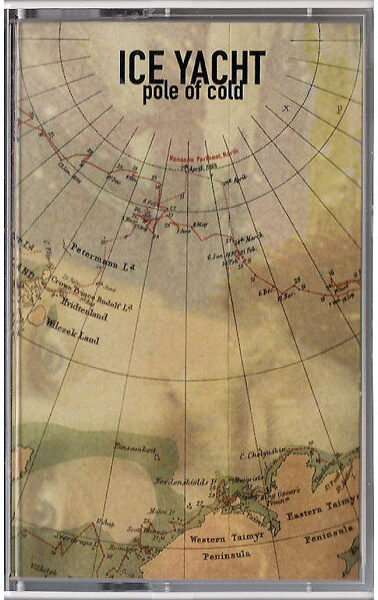 Superb tape of maximal art-electronic fizz and phase propelled along with juicy analogue pulsations by the cubic tonne…this is Philip Sanderson using another one of his playful aliases (I would mention here the oft-repeated Claire Thomas & Susan Vezey hoax, but it never really had that much mileage), and he first used it as a pen-name in 1981 on Snatch 3, the third compilation tape / showcase for his memorable Snatch Tapes label in the “glory days” of the 1980s when running a tape label was truly a game worth the cauldron.

Pole Of Cold is decked out with a cock-and-bull story involving discovery of a cassette tape in a vacuum flask, a half-baked remake of the Marie Celeste tale, or any story involving a mysteriously deserted sailing ship. “All the tunes are based on real experience,” reports Sanderson, by cable from his holiday chalet located near the Salton Sea. “For instance, ‘Summer with the Snow Bees’ depicts my encounter with a rare breed of insect that does, in fact, only hatch out in summer in the Arctic zones. My contact in the Natural History Museum loaned me a few specimens. They make very interesting samples, especially when mixed through the VCS3.”

The package works overtime to plant suggestions of “Arctic cold” in your mind, as signposts for the music. In fact, it’s not cold music – rather it’s one of the warmest servings of analogue broth yet served by our Man in the Hastings Bungalow, and my my reckoning Sanderson couldn’t produce a “bleak cold ambient” record even if forced to do so at point of a Mauser. He’s simply too warm a human being, too generous of spirit. However, the cassette cover is also covered with map-like images, and I’ll grant you that these six tracks of rich blastage do manage to set the listener on a fascinating sea-faring voyage of the mind. For instance, take ‘Racing the Arctic Shadow’ – Sanderson tells us “this one dates from my months in service as a merchant seaman with the Blue Star Line. You wouldn’t believe how impatient some of our customers were, even when the delivery point was 5 months away by sea. We had to really stoke the boilers to meet this quota on time!”

In short, Pole of Cold is not a nightmare journey on the Flying Dutchman, more like a leisure cruise on a slightly odd schooner where we’re obliged to play quoits on deck even when the nine-pins keep rolling into the sea, and on our arrival at the Captain’s Table all the guests are wearing fright wigs and false moustaches. Whether this music dates from the early 1980s I couldn’t say, but I suspect it’s of a more recent vintage given the general sound quality and smoothened edges. From 29 April 2015.