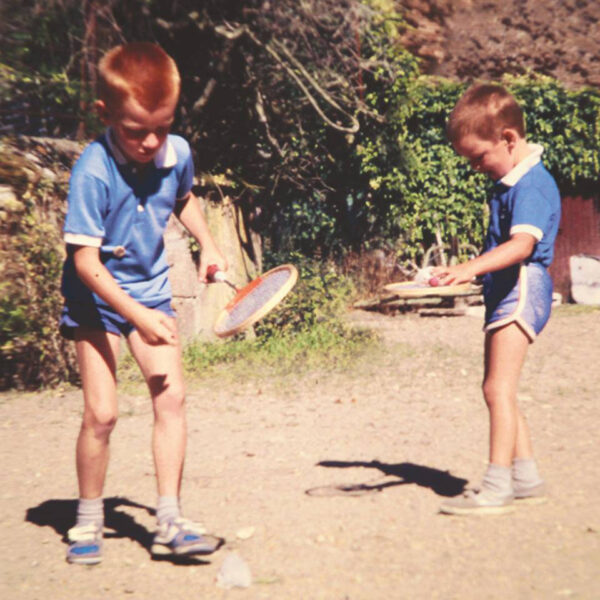 Another four cassette tapes from Spina!Rec kindly sent to us by Sergey Kostyrko (the co-founder of the label) from Izotova in Russia. Said parcel arrived 21 April 2015. We last had one sent here in December 2014. Considering how small the editions here, I (and you, listener) need to be quick off the mark if a physical copy is wanted to sit on your shelves. At time of writing, all 25 copies of each title are sold out. Even my copies are marked “Edition 2”.

Sergey Kostyrko plays on the first item, Beginner’s Luck (SR010) along with Rutger Zuydervelt, the famed Dutch king of enigmatic electronic bloops and uncertain murmurings. A live recording in two parts from the Fulldozer Festival in St-Petersburg, where the duo wowed the crowd in 2014. The label seem especially proud of the all-analogue production chain that created the finished product – originally performed on analogue synths, and mastered direct from magnetic tape. Even the mastering unit had valve tubes. The music itself is a gloomy and bleak episode of alienating grey moans, sometimes punctuated with tuneful static messages beamed to us from the Planet Zohar. While tentative and inconclusive, these statements have an unusually beautiful hue to contrast with their blank starkness.

ADDZ (SR012) by ADDZ is a much livelier electronic album which demonstrates its commitment to binary code (or to numbers, at any rate) by emphatically printing bold numerical characters on its cover. It’s certainly the one to grab if you like beats and rhythms, albeit said beats are presented in a minimal and clinical manner. The duo of Alexander Zaitsev and Dmitriy Dubov are specialists in “intelligent electronics”, if that means anything to you; to me it means they feel entitled to behave like robots equipped with stethoscopes. I liked the clean sound of their productions, but the melodies are barely there, each tune seems unfinished, and there’s a general sense of purposelessness to their twittering sequences that is unsatisfying. Imagine a Depeche Mode backing track being carved on the face of the Moon by astronauts using hand-held lasers, who give up trying after 25 mins.

SR011 with its gorgeous blue cover art is a split item. The duo of Jelena Glazova & Grigorij Avrorin came about when Jelena (visiting from Riga) appeared at the Fulldozer Festival and got involved in creating some form of accompaniment for Grigorij’s minimal synth solos. Six tracks of disconcerting bleak industrial noise were the result, music which I find impressive for its near-complete lack of humanity, unpredictable moments, and highly Spartan arrangements filled with weird gaps. I’d like to think the pair found their way to this unique, unrepeatable place through purely intuitive methods. Their grim sonic pronouncements would make ideal background music for a visit to an urban “development”, of which there seem to be a lot in London just now; it’s the sound of claustrophobia and blocked pathways. It’s rather rare to find women involved in this genre of music, so Jelena’s imaginative approach is most welcome; she comes to it from a background in visual art and poetry.

Bisamratta offers a single track, ‘Beregu’, on his side of the split, some 28 minutes of advanced guitar ambient drone. Vladimir Luchansky is one of the burgeoning Novosibirsk crowd who clearly pits himself against the “stupid happy Techno music” which currently entertains Russia’s youth (he would probably see it as a blight), and instead frequents the many seedy cabaret bars in that city in search of alternative sounds. He ain’t no Robert Fripp on the strength of this recording, but his effects-laden guitar music quickly drops down to reach the ice-cold temperatures that are required for Spina!Recs admissibility. The sustained near-magnetic humming drone is undercut later on with puzzling field recording additions of speaking voices, radio samples, water effects, and solar winds from outer space. It almost becomes the soundtrack to a Russian cosmonaut sci-fi movie of the 1960s.

SR016 is another split. Smola, a duo from St-Petersburg, appear on side A with ‘Burning Bamboo’ – a spectacular 18 minute performance of mesmerising acid-space-rock that in fact contains three separate tracks used to “hammer” the audience into submission at a live set. Lovely stuff; I’d happily face that mallet any day of the week. You’ll be glad to learn the spirit of Hawkwind lives on in this convincing update on early 1970s festival rock, taken by way of the usual suspects – e.g. The Stooges, Black Sabbath, and even Spacemen 3 who continue to cast a long shadow. They temper their hypnotic and heavy guitar-drummy numbing rhythms with shouty punk vocals and, most enticingly, their mean use of the wah-wah pedal. Not heard retro-rock as straightforward as this since the glory days of High-Rise and Mainliner did it in Tokyo…great!

Mars-96 have three lengthy tracks…the work of this combo is described by the label as “thoughtful melodies are turning into chaotic massacre in the end”. I found their highly disjunctive guitar-bass-drum stylings a little irksome to begin with, but thought that its abiding air of studied futility is bound to appeal to diehards who enjoyed listening to Vibing Up The Senile Man in 1978. However, once they liven up and find the “groove”, they start to resemble 1974-period King Crimson in terms of malevolent guitar violence and remorseless repetitions, which is not a bad place to be. While Mars-96’s performances are somewhat haphazard, it’s possible to discern their intentions and glimpse the tricky zone they’re trying to push themselves into, and the listener will urge them to complete the journey.