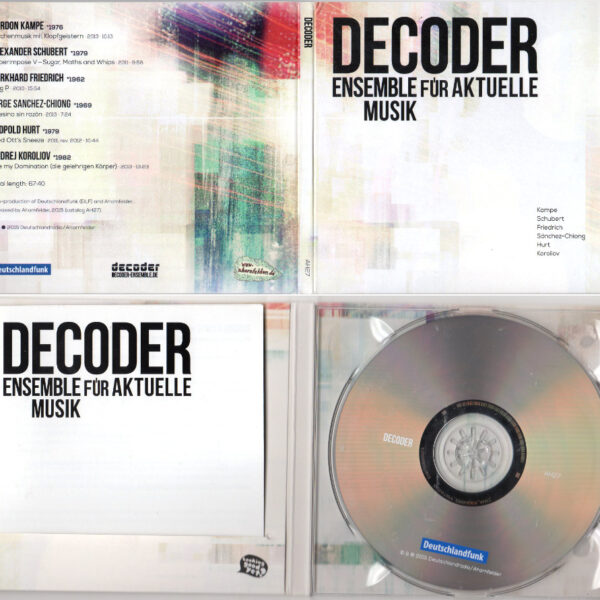 A dense and challenging listen from Decoder, on their self-titled CD (AHORNFELDER AH27) where they identify themselves as an Ensemble für Aktuelle Musik. These young German and Austrian musicians form a septet dedicated, it seems, to playing difficult and far-out post-modern contemporary classical compositions, and get their fangs into six selected pieces by modern composers; some of whom are also members of Decoder. What unites the works of Gordon Kampe, Alexander Schubert, Burkhard Friedrich, Leopold Hurt et al is that there’s a strong integration of electronic and sampled elements, even when the basic framework calls for a chamber ensemble of traditional, acoustic instruments (and the human voice, too). The listener will be rewarded with a tangled tapestry of woodwinds, keyboards, cello and percussion with multiple electronic parts woven directly into the work. We’ve come a long way since Varèse, that’s for sure…somehow this release even feels like an update on Stockhausen, because I would surmise all those involved have grown up with sampling technology and electronic keyboards as a given part of their worlds, along with remix culture and dance music, rather than something they’ve had to learn and apply to traditional music composition. “Digital natives” is a term that springs to mind, even though that’s usually applied to computer literacy and coding skills.

Another strong part of their success is probably due to Alexander Schubert, credited simply with “sound design”, which I would imagine involves an approach to sound projection and stage management that surpasses any given performance of Hymnen. I’d like to think he brings techniques from both the rock arena and the dance floor; an educated guess, seeing that this conservatory-trained genius emphasises his strengths in “the combination of different musical styles (like hardcore, free jazz, popular electronic music, techno) with contemporary classical concepts.” Decoder do remind me in some ways of Sam Pluta and Wet Ink Ensemble, whose work (along with many similar polymaths on the Carrier Records label in New York) I have a lot of time for. Decoder have the same restless, manic energy and commitment, plus the same delight in extremes of dynamics, resulting in certain shocking moments on this record which are heart-stopping.

I won’t single out any particular piece of work here as all of them are equally impressive, and I could not improve on the explanations provided by the composers in the booklet, detailing their intentions and methods. Suffice to say their intellectual powers are considerable, the ideas refreshing and innovative. Decoder too have big ambitions; they want to “redefine the very idea of the new music ensemble, rethink the concert format and stage presence, undermining traditional concert rituals”. I’d imagine this isn’t empty rhetoric, as their website shows a large number of live performances in Europe since 2012, and their repertoire of pieces is impressive (even if there are a lot of works by Alexander Schubert). I’m unsurprised to find a Larry Polansky work in that list; Polansky’s work with voice canons, live computer-generated music, and complex time signatures would be meat and drink to a combo like Decoder.

When festival organisers and concert-hall managers try and “go contemporary”, and I’m pointing an accusatory finger at The South Bank London or The Barbican when I say this, the results are usually embarrassing and disastrous, ill-conceived combinations and forced junctions of musical styles that make no sense whatsoever. Such enterprises are often, I suspect, a desperate bid for ticket sales, by way of appealing to some vague notion of “relevancy”, a strategy which also helps justify the existence of these moribund and outmoded institutions. It’s misguided, to say the least! Far better to leave it to the musicians to work out these combinations and reconciliations, and do it through the compositions and the performance, rather than artificially yoking together ideas on the stage of the RFH or Barbican, bolstering the decision with pretentious programme notes. Decoder appear to me to have succeeded in squaring a number of difficult circles; if you’ve any interest in the future of contemporary classical music, step this way.