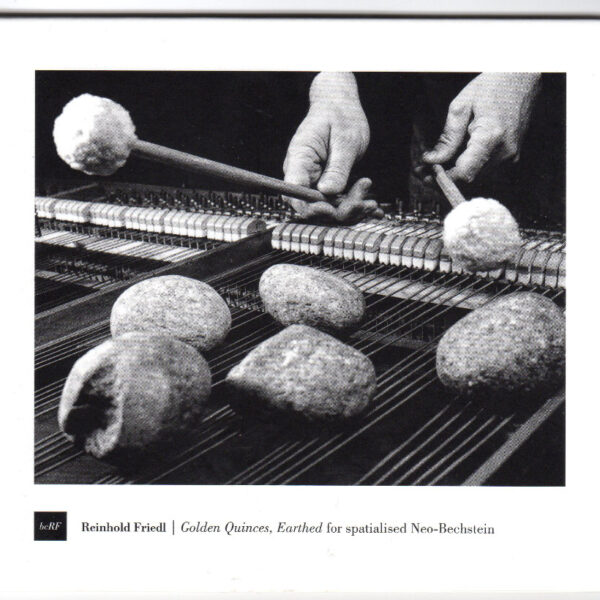 Intriguing one this. A hefty slab of Art. It seems Rheinhold Friedl, inside-piano aficionado, writer on music and composer, has been running this project in parallel with his group/organization Zeitkratzer since 2003. Essentially, having been invited to make use of David Balzer’s ultra-rare 1920s Neo-Bechstein grand piano, he had it modified to output all of its 18 pickups instead of the original mono output. So that’s eighteen channels of Neo-Bechstein to process. It’s also worth mentioning that the original sound dampening and top-end cutting devices designed into the original instrument were removed or disengaged in order to exploit the piano’s “wide sonic capabilities”. Friedl then designed this piece of music, Golden Quinces, Earthed, to be performed with a choice of 8 channel, 12 channel or 5.1 surround presentation options. The material presented on this disc is a recording of a 12-channel realisation made at Electronic Studio at the Technical University of Berlin, with Rashad Becker in charge of recording, production and mastering.

From a very quiet start, which belies the maximalist sonic hurricane to come, Friedl conjures varied and nefarious sounds out of the instrument. Whirlwinds of processing agitate and unnerve the listener. The electronics grumble and belch with barely any residue of the sound of the acoustic instrument. It is as if Friedl is forcibly erasing the very instrument itself, or even the idea of the piano itself. At fifty-five minutes, this piece of music is like a fierce landmark in an otherwise featureless sonic topography. Cosmological weather systems and the sound of contact-mic’ed gravity. At this long duration, Golden Quinces, Earthed for spatialized Neo-Bechstein certainly required a serious commitment from this listener. Friedl uses gestural inside-piano techniques, particularly around the 37 minutes where he produces a series of violent crashes followed by a string of clamorous scraping, bell-like, before continuing with the swirling onslaught.

So, all good then? If there is one thing to take issue with perhaps, it is the following statement which appears on the inside of the gatefold sleeve: “spatialisation is part of the composition”. Okay. But then it also says, lower down: “for 8-track, 12-track or 5.1 version…contact:” Ahem. So why release this standard (reduced?) 2-track stereo version in the first place? Wouldn’t this project have been better presented as a film with the 5.1 soundtrack on dvd?

Wikipedia defines spatialisation in music as “the projection and localization of sound sources in physical or virtual space or sound’s spatial movement in space”. The spatialisation Friedl utilises is only apparent during quieter parts of the piece, and in particular in the last five minutes, but as a great-sounding stereo effect on a hi-fi system.

Commendably, Bocian have included a booklet with comprehensive information about the project, although at times, this reads a bit like it could be part of Friedl’s latest arts funding application. Nevertheless, I found myself edified by nuggets such as “…The new concept is to create modular spatial textures, so that only the types of movement and the relations between them need to be defined. This resolves the problem of most conventional spatialisation concepts which are conceived for one privileged listener…” This is achieved as much through bespoke software and a control surface of faders, both courtesy of Friedl’s partner on this project; Sukandar Kartadinata, as the instrument itself as modified by Friedl. Watch out for this project ripping up a concert hall near you soon.