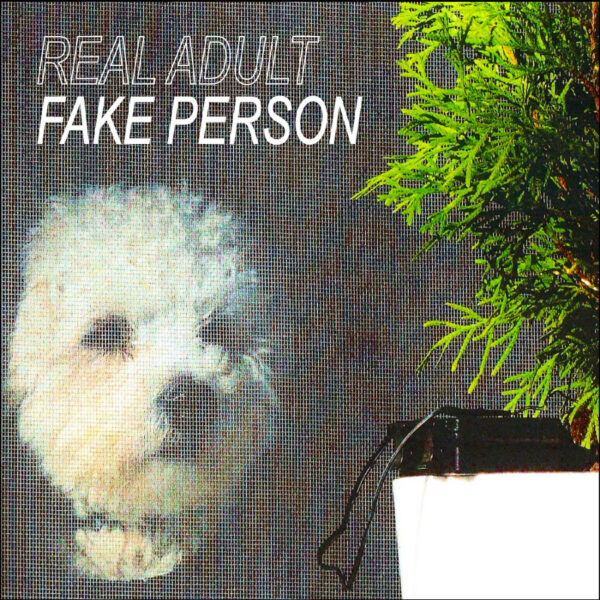 Cassette from the somewhat eccentric Gold Bolus Recordings label…Cory Bracken has drummed on some of the label’s other releases, including those by Why Lie? and Panoply Performance Laboratory, but here he is with his solo debut appearing as Real Adult. On Fake Person (GBR 014), he’s busy generating some quite maximal, metallic, rattling & shivering noise, mostly from the starting point of percussion and banged objects but also making use of feedback and abused contact microphones.

On first listen to his ‘The God Holes Suite’, which arrives in five separate movements of obnoxious electronic shriek on side one, I bethought me of the work of Max Neuhaus, who famously drummed his interpretations of modern music in the 1960s – including memorable versions of Cage’s ‘Fontana Mix’. It’s fair to say that Neuhaus made a somewhat more studious and considered use of feedback, but Bracken is getting to more or less the same spot, just doing so in a more indie-punk rock manner. Come to that, I like the sense of frustration and anger that has led him to this music, a dispirited “what’s-the-use” energy which infects everything he touches. The press release takes some delight in telling us that the “Real Adult” persona created by Bracken is “depressed and anxious…bitter and confused…pure id”.

On the flip side ‘A Course In Miracles’ is less noisy, but no less futile; it resembles the actions of a man applying lessons learned from Eddie Prévost about bowed cymbals, but doing so resentfully, like a 1980s teenager grudgingly doing his homework when he’d rather be watching MTV. By the time of ‘Idiot Shivers’, that same teenager has reached the end of his tether and is breaking up the household china in desultory fashion. Not bad, if a little tentative in places; I’d have preferred more force and conviction in the noise, but even so Fake Person wins out for its barbed, spiky aura, much like the listening equivalent of a cactus. From 6th May 2015.