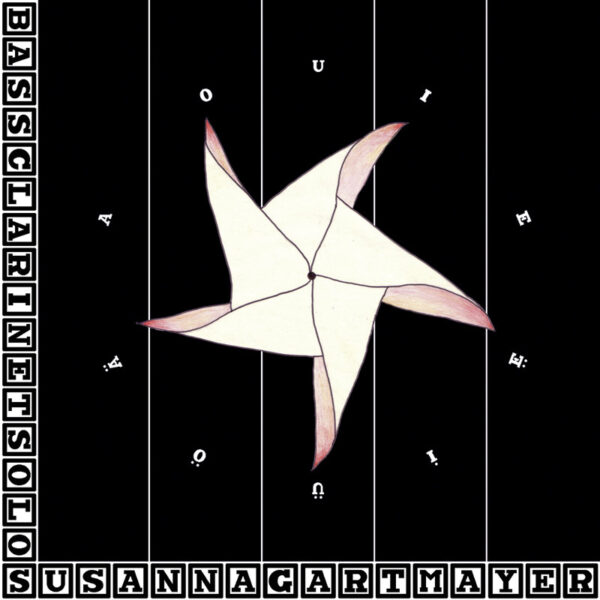 Outstanding solo record of bass clarinet solos performed by Susanna Gartmayer on her AOUIE (CHMAFU NOCORDS 56 / GODREC GOD 29) album. The power of her work may derive partially from its simplicity and conceptual wholeness…the starting point appears to be the mouth cavity shapes she has to make for each piece, related directly to vowel sounds created by the human gob. The titles ‘A’, ‘E’ and ‘UE’ reflect this strategy to some degree. Right there you’ve got a basic given of woodwind instrument playing, a skill which we normally don’t pay much attention to – the embouchere – amplified and exaggerated for artistic purposes, and encoded directly in the work itself, right down to the very titles.

She’s also keen to emphasise the “multiphonics” of the instrument, calling attention on this recording to the sound of the keys and her own breath, things which other modern woodwind and brass players have been doing for some time now, but in her case it’s integrated with the overall artistic statement, all part of the ingenious package. For instance, there’s also a live show for this set, which exhibits the same attention to detail – every set-up for every tune is slightly different, taking into account the way the audience are sitting, the acoustics of the venue, and the playing position she wishes to adopt. I like the comprehensiveness of this approach, even it feels a bit control-freaky; leaving nothing to chance could be said to be the exact obverse of so-called free improvisation.

Viennese player Gartmayer’s work has crossed our path before, for instance on the Dirac album Phon in 2010 (which I hated), and on the album by Broken Heart Collector featuring the songs of Maya Osnik in 2011 (which I loved). You may also find her work on record as part of the Joëlle Léandre Tentet and The Vegetable Orchestra. From 2nd March 2015.